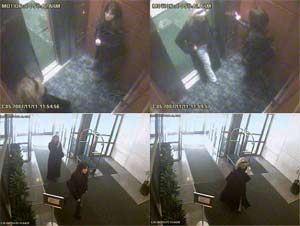 An ex-husband and other acquaintances have been sharing their experiences with the two women accused of robbing open houses in Manhattan and NJ. After a rash of robberies sparked fear in home sellers - and their brokers - the police caught the suspects and Jessica Joyner and Jennifer Jones have pleaded not guilty to grand larceny and other charges related to at least four robberies on the Upper East and West Sides, and will be extradited to NJ next week.

The two women, who lived on the Upper East Side, have been described as living the good life, going to Elaine's and wearing expensive clothes. But Joyner's husband painted a very different picture, saying that Joyner abused cocaine, ecstasy and Quaaludes and experienced "dramatic mood swings." An Upper East Side jeweler, who valued Joyner as a long-time customer, told the Post that she was also very polite, but was suspicious of Jones, who he thinks manipulated Joyner into the robberies. He also noted that Joyner went to his store with an IV tube in her arm one day. Also:

Several people who live near Joyner's apartment said they believed, based on her holding hands with Jones and other traits, that the two women were engaged in an affair.

"There was something fishy about the brunette," said one woman about Jones. "She was always very masculine."

Today, the maitre d' at Elaine's tells the Post that Joyner was generous, buying drinks to other customers. She even bought Phil Spector a bottle of champagne before he went on trial. But an Elaine's customer who met Jones felt she was "a hard-edged woman."