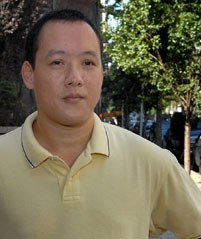 Transit police officer Gregory Chin is being hailed as a hero for stopping a crazed man who had just stabbed two people in Murray Hill from inflicting more violence. The Post and Daily News interviewed Chin, who was off-duty when he saw Lee Coleman attacking 67-year-old Susan Barron with a variety of knives (knives that Coleman stole from a restaurant) on Saturday morning.

Chin explained that he and his girlfriend had left the Gemini Diner when he saw Coleman kneeling over Barron and thought the attacker was a Good Samaritan - until he saw that Coleman was covered in blood. So he identified himself as a cop and yelled for Coleman to drop the knives and get down. Coleman refused and as onlookers yelled, "Shoot him! Kill him!" Chin fired, wounding Coleman in the stomach. It was the first time Chin, a 6-year veteran, ever fired his gun; Chin was apparently about to begin a week of vacation and told the News, "You're on the job 24 hours a day, even on your days off...He was a threat. I think any other police officer in the same situation would have done the same; that's the way we are trained."

Barron is in serious condition, after being slashed all over her body. A breast cancer survivor, she was on her way to have her dog blessed at a nearby church when she was attacked. Amarjit Singh, the chef at the Texas Smokehouse BBQ who was slashed when he tried to stop Coleman from leaving with knives, is also in serious condition; his nephew says doctors are trying to reattach his ear.

And Coleman's sister, Teresa Gonzalez, wept to the News about her brother's condition. She said he was schizophrenic and bipolar, "He's going to be devastated when he realizes what he did. We're very sorry about what happened to that man and that poor lady." The Post spoke to a source who suggested that the $300 monthly cost of drugs was too much for Coleman to afford. Coleman was charged with attempted murder.

The Daily News has an editorial begging the city and state to "come to grips with the obviously large cracks that enable people with dangerous mental illnesses to victimize themselves and others."