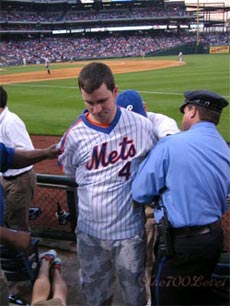 America's favorite past time is also apparently when fans like to drink and go crazy!

Last night, there a Mets fan was arrested and other were removed from Shea Stadium when a series of fights occurred in the stands. According to 1010 WINS, "fights and food-and-beverage-throwing altercations cropped up on two decks on the third-base side"--which happened right after the Braves took the lead!

Just last week, some Mets fans were arrested during a Phillies game at Citizens Bank Park. As The 700 Level's Enrico wrote, many "obnoxious" Mets fans traveled down i-95 for the game--"You can’t blame them really. It’s hard to pass up a chance to spend a beautiful Saturday at a ballpark infinitely more enjoyable than their own."

Burn! Anyway, the fight was apparently started when a "moron in a hideous Mets Dykstra jersey threw haymakers at a rival fan." Dykstra fan was led out in handcuffs to an ovation and someone sent a picture of him to The 700 Level

And when the Yankees and Red Sox met last week, someone captured the a fight in the stands. (There's nothing like fans who take off their shirts!)

Some of other stupid fan incidents: A Mets fan "shining" a flashlight at Braves pitchers, the Mets fans who tried to steal Shea seats, the Yankees fans who tried to steal a banner, the Yankees fan who fell into foul ball netting, the Mets fan who pretended to be a member of the press to gain access to players, the Red Sox fan who buried a David Ortiz jersey in the new Yankee Stadium... okay, the list is very long.