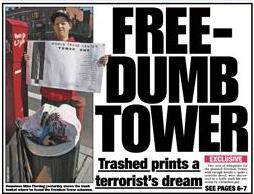 Proving that there's a market for oversize shredders, a homeless man discovered two copies of blueprints for Freedom Tower, aka World Trade Center Tower One, in the trash at Sullivan and Houston Streets. The Post puts Mike Fleming (a "homeless, recovering drug addict") on the cover and questions the security lapse, pointing out, "It's a good thing Osama wasn't walking through SoHo yesterday morning."

Fleming had been looking for cardboard to sleep on when he discovered the plans. While the blueprints weren't complete and are from last October, they did "contain details such as plans for each floor, the thickness of the concrete-core wall and the location of air ducts, elevators, electrical systems and support columns." A security consultant warned, "Certainly, if you know the thickness of concrete, someone with an explosive background can develop and plot an attack."

The Port Authority, who is in charge of WTC construction, is launching an investigation and told the Post, "Violating these protocols is cause for serious disciplinary action - up to termination for employees and breach of contract and legal action for contractors."

#freedom tower
#homeless
#port authority
#stupid
#world trade center
#wtc
Do you know the scoop? Comment below or Send us a Tip
A new Gothamist is coming! We’ve moved comments over to our beta site. Click here to join the conversation and get a preview of our new website.