One Person Killed After Plane Crashes In Long Island Backyard

One person was killed after a small plane crashed into the backyard of a home in Long Island earlier today. The pilot of the four-seat plane was killed when it crashed into a residential neighborhood in Shirley, Suffolk County around noon Sunday. "Just experienced a plane crash. Actually helped stabilize two of the three people and helped with the wounds and burns," tweeted Cevat Taginik. 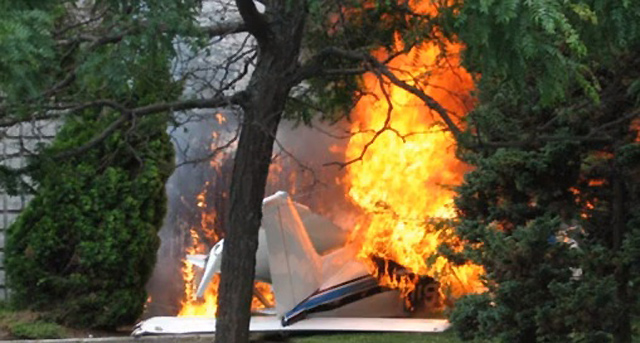 Federal Aviation Administration spokeswoman Kathleen Bergen says the aircraft hit the ground about a mile north of Brookhaven Calabro Airport. She says the agency was told there were three people on the plane. Several people were taken to the hospital with burns, but no names have been released.

Jeff Litwin, who lives on the street a few hundred feet from the crash, told ABC that a neighbor "was trying to put out the fire with a garden hose, but it was too hot and he couldn't get to a person trapped inside." It's unknown what caused the crash, but you can listen to police audio when the crash happened:

#backyard
#long island
#plane
#plane crash
Do you know the scoop? Comment below or Send us a Tip
A new Gothamist is coming! We’ve moved comments over to our beta site. Click here to join the conversation and get a preview of our new website.