One Life to Allegedly Attack Three People in Midtown 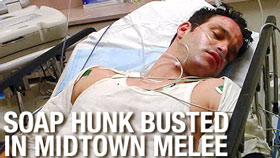 Early yesterday morning in Hell's Kitchen, soap opera actor Nathaniel Martson allegedly attacked three people. The Daily News reports that Marston, who plays Dr. Michael McBain on One Life to Live, swung a metal crate at his victims, which broke one of the men's legs. One of the victims, Salvatore Cabibo who didn't even know the actor, said Marston had been arguing with a cab driver and then charged at him, shouting, "I'm going to get you!"

Police believe Marston was under the influence of drugs during the attack. The News took a photograph of Martson after he was arrested and taken to Bellevue (pictured), contrasting it with a photograph of Marston in a hospital bed on the show. Doctors "labeled [him] an emotionally disturbed person" and released him later in the day, and then the News went to check up on him at his home. Marston told the paper, "I don't want to talk to you, and please don't ever come to my home."

Marston was charged with assault, reckless endangerment, criminal possession of a weapon, and resisting arrest. On his official website's press area, Marston put up a 2001 Soap Opera Weekly article about his bad boy rap after he was arrested for punching an ATM in 1999, explaining, "I have this - I'm beginning to control it - but it's called lack of impulse control." Marston was initially charged with criminal mischief but then charges were dropped and said in another interview that that he paid for the machine, "which was broken to begin with." He also said that the tabloid press is "one part of the business that could make me run away."