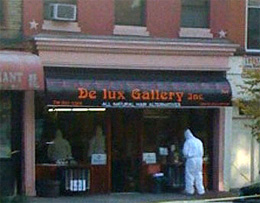 Wire reports say that five people were just shot at 91 Hanson Place in the Fort Green neighborhood of Brooklyn. One witness described it as a "shoot-out"--this is just blocks from the Fulton Street G and Lafayette Avenue C subway stations and right by the Atlantic Center. Brownstoner hears that cops are telling people to stay inside. Fort Greene and Clinton Hill have been experiencing a spike in crime recently.

Update I: City Room reports that after chasing a victim inside, a gunman opened fire "inside a hair salon that runs from Fulton Street to Hanson Place in Fort Greene." Four people were shot and one man was pronounced dead. One victim was a off-duty police officer, a salon customer--"She was not acting in a capacity as a law enforcement officer and did not return fire."

Update II: 1010 WINS reports the salon is called De-Lux Gallery Hair Salon. The victim chased into the store was the male victim who was killed--and he was apparently armed. The off-duty police officer was hit in the leg; the three other victims' injuries are also described as non-life-threatening. The shooter is still on the loose, but the police did find his abandoned 2001 Chevy Tahoe.

#fort greene
#Hanson Place
#shooting
Do you know the scoop? Comment below or Send us a Tip
A new Gothamist is coming! We’ve moved comments over to our beta site. Click here to join the conversation and get a preview of our new website.