One Arrest, One Still Wanted in Rape of Queens Teen 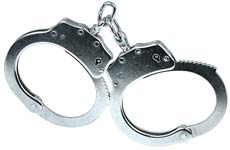 Last weekend, a young woman was celebrating her 19th birthday when two men crashed her party and later raped her. The police arrested one of the suspects yesterday and are still looking for the second.

Saturday night, James Moye and Daquan Williamson apparently tried to join the party in a Queens Village home. One even "whipped out a black handgun" but they left the house after a fight. However, they stayed in a van outside the home and waited for the birthday girl and her boyfriend to leave. They chased the pair and kidnapped the woman, raping and sexually assaulting her.

The pair abandoned her at the Jamaica Center mall, and Newsday reports the victim went into a subway for help (the Daily News says a transit cleaner called the police). She was also to identify Williamson and Moye from mugshots, and police arrested Moye after finding him "hiding under insulation in his attic." Williamson is still at large.

A NYPD special victims police officer explained that the suspects "mistakenly believed the [victim's' boyfriend had mouthed off to them." Moye was charged with kidnapping and rape. Queens DA Richard Brown said, "Like predatory animals, the defendant and an unapprehended individual are alleged to have chased down their victim before brutally victimizing her at gunpoint."