One Answer To The Cross-Hudson Commuter Nightmare Is... The Javits Center?

Instead of tackling an estimated $10 billion rehabilitation plan for the grimy, packed Port Authority Bus Terminal, a major transit research organization has pitched a plan they say would more rapidly relieve commuter pressure: build a bus terminal in the basement of the Javits Center.

The Regional Plan Association's idea is part of a larger proposal to address the booming commuter traffic by bus and rail between Manhattan and New Jersey even as the main rail artery between the states crumbles.

"Javits would be an ideal place to move the intercity busses—20 percent of gates in Port Authority now," President Tom Wright said on a conference call with reporters Wednesday. "You don't have to decide the longterm future of the Port Authority. Instead you relieve the pressure and buy some time."

In addition to the the Javits Center terminal, the RPA's "holistic" plan includes the Gateway Tunnel project, an expansion of Penn Station one block to the south (which has Amtrak's approval), and new commuter train tunnels from Penn Station, under Manhattan and the East River, to Sunnyside in Queens.

While Governor Andrew Cuomo has stressed the need for Gateway and an expanded Penn Station, his $3 billion vision for Penn does not include through-running tracks to Sunnyside, which planning groups say would be necessary to keep up with passenger demand in the long term and prevent awkward cross traffic on the rails within Penn Station.

According to the RPA, a so-called "Gateway East" extension to Queens would increase capacity under the Hudson River by 138 percent. Crucial, as daily train trips under the Hudson nearly tripled between 1990 and 2015—from 71,894 to 194,377—and will continue to increase.

"The easiest and most cost effective way to increase capacity under the Hudson is to extend the tunnels out to Queens," Wright said.

RPA declined to provide exact figures for the cost of the bus terminal but said they predict the $3.5 billion set aside for Port Authority repairs in the Port Authority's latest capital plan could cover the cost of Javits Center renovations. Gateway East would be "in the ballpark" of $7 billion, they added. 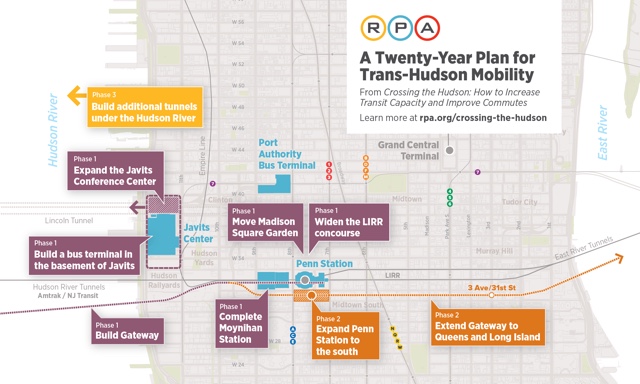 Jim Venturi, the principal designer at urban planning firm ReThink Studio, argues that through-running service could be achieved without Penn Station additions to the south: a point that he and the RPA have been squabbling about for months (our own Jake Offenhartz has detailed these differences exhaustively.) "Our proposal would optimize the station, widen the platforms, and allow all trains to be through-running for the same $7 billion set aside for Penn Station South," he predicted Wednesday.

Meanwhile a new Javits Center terminal would "isolate all of those people on the far West side" and put undue pressure on car traffic, he added.

The only accessible subway line to Javits Center is the 7 train.

"We believe we're not going to send all of the bus people to Javits," said Jeff Zupan a senior transportation fellow with the Regional Plan Association. "We're talking about a sizable percentage. As we expand the rail, we'll ease pressure on the number 7 train, because people will be using buses less and trains more."

The RPA plan would require considerable coordination between the Port Authority, which controls the bus terminal, and Amtrak, which controls Penn Station, not to mention the governors of New York and New Jersey, City Hall, and the Javits Center.

"As we've said many times, it's important the Port Authority consider the bus terminal as part of a comprehensive trans-Hudson strategy," City Hall spokesman Austin Finan told Gothamist. The Port Authority declined to comment; the other agencies and government offices did not comment by press time.

Crain's points out today that the Port Authority has shot down proposals to split the bus terminal in the past.

Meanwhile, despite his campaign pledge to champion infrastructure, President Donald Trump has yet to fund half of the Gateway project, as promised last year.

"We need President Trump to fulfill the federal commitment to make Gateway a reality," Governor Cuomo said at an Association for a Better New York event last month.

"Remember the one trillion dollar infrastructure proposal that he spoke about?" Cuomo added. "One trillion dollars. Where is it? What happened to it? It was the single best idea that I heard come from his campaign and now it's disappeared."

"I think it's inevitable that this happens," Wright replied. "The question is: do we plan ahead, or do we wait for a catastrophe to force our hands? One of those two things will happen."

RPA's bus terminal and Penn Station proposals are part of a larger regional plan, the group's fourth, to be released November 30th.

[Update 8/17]: Stephen Gardner, Amtrak Executive Vice President, stated Thursday that, "While additional tubes under the East River are not included in the Program currently, the plan does not preclude expansion to the east in the future."

#Bus Terminal
#gateway
#port authority
#regional plan association
#Transit crisis
#original
Do you know the scoop? Comment below or Send us a Tip