On the Market Diner 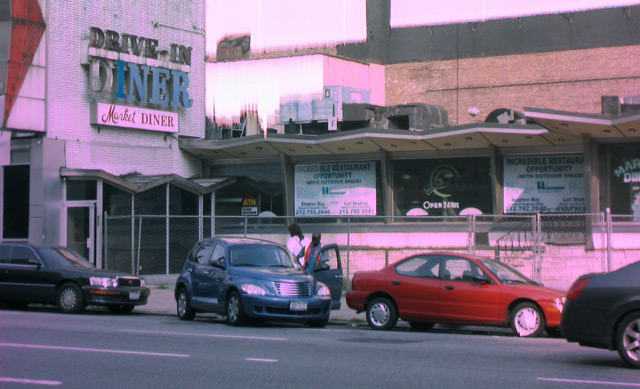 The New York Times looks at the Market Diner today, the Hell's Kitchen restaurant that occupies the corner lot on 43rd St. and 11th Ave. The diner closed in 2006, but has thus far avoided the wrecking ball, while grass sprouts from cracks in the parking lot where large sedans used to pull in 24 hours a day. The Times says the Market Diner opened in 1962, but the painted glass window out front says 1963, right above the image of the Statue of Liberty about to bite into a hamburger. The current owners want to rent the property and interested parties include a high-end restaurant, a skate shop, and a graphic design firm, according to the Times. The lot is not zoned for any high-rise development.

The family that ran the Market Diner in its heyday relate tales of closing off the back room for private parties with the likes of Frank Sinatra, who liked to congregate there with his friends after last call at New York bars. Members of the Westies gang would also eat, drink, and socialize there, once taking a break from dismembering a body in a nearby apartment to grab a bite to eat. One of the former partners in the diner described the gang as protective of the establishment's business, even if one of its members did shoot someone in the parking lot once. 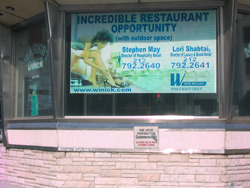 “If they had any trouble amongst themselves — if a Jersey crowd came over, like an anti-Westies gang — they made sure any arguments were outside in the street,” said Mr. Zelin, who is retired in Delray Beach, Fla. “So there was no mark against the diner, so it wouldn’t lose its license, because if it lost its license, they’d have no place to hang out. As bad as these people were, they were protective of their hangout.”

The Market Diner was built by DeRaffele Manufacturing, a New Rochelle company that is famous for its prefab diner construction. With its zigzag upswept roof and large plate glass windows, the Market Diner appears to mark the tail end of the Googie style of architecture in American diners. New York Architecture has some excellent images of what the Market Diner looked like during its better days.