On The Five Year Anniversary Of Hurricane Sandy, Is NYC Ready For The Next One? When Hurricane Sandy hit five years ago, on October 29th 2012, New York got a wake-up call. The unprecedented storm surge and subsequent flooding leveled coastal communities like Breezy Point and Midland Beach, while public housing residents, many of them elderly and infirm, were trapped without heat or electricity. Forty three people died in the storm in New York City, including two toddlers who were swept away from their mother in Staten Island, and a 13-year-old girl who drowned in her Tottenville home with her father.

In the years since, both the city and state have made sweeping efforts to protect NYC should it be hit by another storm of Sandy's strength—and research suggests that could happen with much greater frequency due, in part, to melting ice sheets in Antarctica and Greenland.

Still, with this past hurricane season wreaking significant devastation across urban areas like Houston and in Puerto Rico, and with climate predictions showing more Hurricane Sandy-like storms on the way, are we really ready?

The answer, it appears, is yes and no.

"We are absolutely safer than we were when Sandy hit because of the upgrades we've made to emergency procedures and because of the infrastructure investments we've been making," Dan Zarrilli, Senior Director of Climate Policy and Programs for the de Blasio administration, told Gothamist. "And we'll have much more to do before we'll ever be satisfied."

"The bottom line is, after Hurricane Sandy, New York really took the challenge of improving coastal resiliency seriously and a lot of great work has been done across the board," Jordan Levine, a spokesperson with the New York League of Conservation Voters, told Gothamist. "New York is much better prepared for the next storm, and I think New York is significantly better prepared than a lot of other coastal cities around the country." But Levine cautions that "no city is fully ready for the next big storm. There's still a lot more work that needs to be done."

According to the Mayor's Office of Recovery and Resiliency, the city cobbled together $20 billion (a mix of federal, local, and public-private partnerships) to climate resiliency projects, and has thus far added 4.2 million cubic yards of sand and 9.8 miles of dunes to vulnerable coastlines in Coney Island, on the Rockaways, and in Staten Island, in addition to adding bulkheads to low-lying waterfront zones. The city rebuilt the Rockaway Boardwalk, transforming it into a flood barrier between the beach and its neighboring residential areas. It has set up flood protections and coastal storm risk reductions in neighborhoods like Red Hook and Sea Gate, and invested in resiliency programs on the Lower East Side, Midland Beach, Two Bridges, and Hunts Point, to name a few.

Other efforts to bolster city infrastructure include funding future upgrades for NYCHA buildings, incorporating more flood and other climate protections into the building and zoning codes, securing FEMA funds for city hospitals, (some of which lost backup generators during Sandy), restoring wetlands in Staten Island, repairing and upgrading flooded subway tunnels, and rehabbing the water tunnel between Brooklyn and Staten Island, which was damaged in the storm surge.

The city also launched the Build It Back program, which provides construction funding for homeowners whose property was destroyed in Hurricane Sandy to rebuild either in their original spots or in less vulnerable locations, though the costly initiative has faced criticism for being delayed and over-budget.

"These projects are going to be what we're talking about for the next several years, and we're working to integrate into our entire capital program, and really the entire city, build it into our DNA that we're building more climate resilience," Zarrilli, says. "We're doing that with our building code, we're doing it with our zoning code, we're adopting more design guidelines for our entire capital budget span for the city."

Advocates say it's up to the city, state, and federal government to continue to work on a multi-pronged defense against the effects of global warming.

"I think people are looking for single, big fix solutions, which people often like to have when they're faced with big problems, and we haven't really decided on building some kind of massive gates the way that London and Rotterdam have," says Ben Orlove, a senior research scientist at the International Research Institute for Climate and Society and a professor at the Columbia School of International Public Affairs. "That's probably good, because I think any kind of major defensive work would create bigger problems in some areas, even if it would defend, say, New York City itself."

Orlove says the city and state have done a good job of building up the city's gray infrastructure—non-natural additions like bulkheads, boardwalks and sea walls—in the wake of Sandy, but it still might not be enough.

"There are larger areas of infrastructure that are hard to know what to do with, like the airports. What if they flood, not for an hour or two but for a few days?" Orlove said. "And I think there are other pieces of infrastructure that remain unknown. Lower Manhattan, there's some discussion of building a wall around a part of it." The wall refers to a Danish company's proposal to build a protective flood wall from West 57th Street down to the Battery; the city plans to incorporate some of that proposal as part of its Lower Manhattan Coastal Resiliency project.

Orlove added, "It's very hard to imagine a high wall curving around the Hudson and the Battery and up the East River, but there'll be more flooding unless something is done, or there's some kind of relocation." 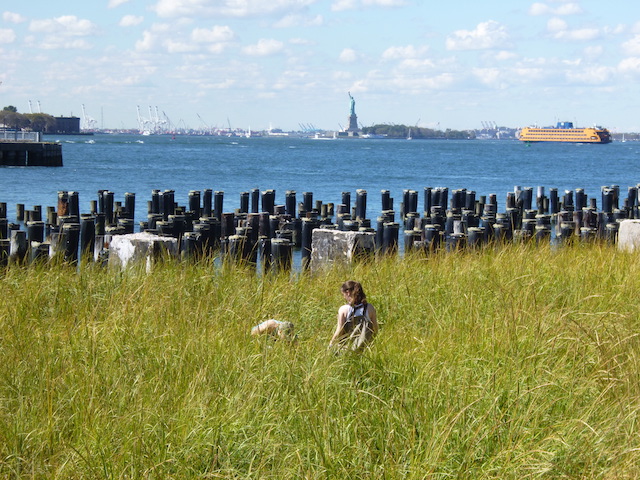 Bill Ulfelder, executive director of the Nature Conservancy, says one of the best ways to combat coming natural disasters is to make significant investments in natural defenses.

"I think the thing that people need to remember is that we can make really smart multi-benefit investments in things like nature, wetlands, forest, dunes, oyster reefs, mussel beds," Ulfelder told Gothamist. "Ultimately, the natural defenses of the green infrastructure produces a lot of benefits. It gives us wildlife habitat, recreational places, it helps clean our water. It itself can help absorb carbon and mitigate the causes of climate change."

The city has worked with the Nature Conservancy to come up with a hybrid gray/green infrastructure approach, combining efforts to pair bulkheads and sea walls with green projects like marsh island restoration and oyster reef breakwaters in Jamaica Bay, and natural drainage corridors, called Bluebelts, in Staten Island. "There's a lot of investment going into green infrastructure," Zarrilli told Gothamist. "In fact, the amount of damage from Sandy was some hundred million dollars less because of the wetlands and marshes that were in place before Sandy."

Some have voiced concern over the real estate boom along the city's waterfront over the last decade, even with the added flood risk. The Sierra Club, which is participating in a Hurricane Sandy Anniversary rally on October 28th, has called for "a moratorium on new real estate developments in flood-prone coastal areas," in addition to ramping up the city's transition to renewable energy sources, Lisa DiCaprio, Sierra Club NYC Group's Conservation Chair, told Gothamist in a statement.

In response to the concerns about waterfront development, Zarrilli says, "I don't think we want to discourage that right now."

There is also the issue of relocation, which some experts say should be one of the key components in the city and state's efforts to shore up its coastline, both to prevent waterfront residences from getting destroyed and to replenish natural protections that have been lost to overdevelopment.

Orlove pointed to a 2009 buyout program in Fargo, North Dakota, that purchased homes located near the Red River and turned the empty plots into a city park. "Having people being willing to move out of flood-prone areas does work," Orlove said. "It can be done, and I think we should look at that."

Ulfelder called buyouts "a really smart investment in adaptation...This idea that you can not only move people out of harms way and thus avoid having to pay to rebuild, over and over, their homes, businesses, so you avoid those future cost but you also, in places allow nature to come back." 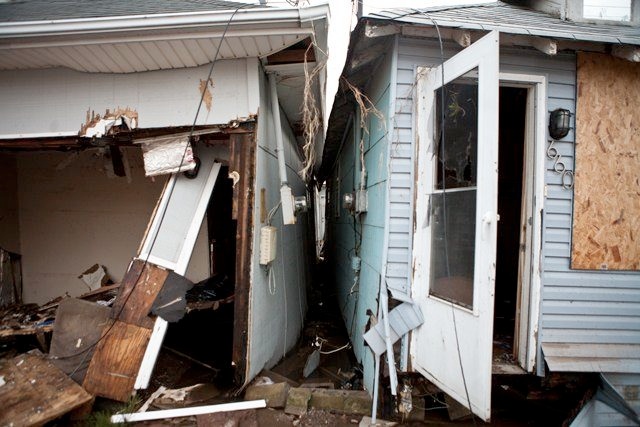 There have been efforts to relocate residents in flood zones in the wake of Hurricane Sandy, and in 2013, Governor Andrew Cuomo proposed a home buyout program to purchase and demolish homes destroyed in the storm, then preserve the land plots to protect the coastline. The program has been fairly successful in parts of Staten Island. The city has also been acquiring and moving and/or upgrading homes as part of the aforementioned Build it Back program.

"We've been acquiring homes, some of which are going be redeveloped into safer and more resilient homes, and some of which are just going to be returned to nature because of our Bluebelts, or because they're adjacent to parkland," Zarrilli said. "There's definitely been some targeted work by the city already to consider ways to eliminate and reduce the density in some of our coastal areas."

It's harder to address population-dense waterfront areas like Red Hook, Coney Island and the South Bronx. The city secured a $3 billion grant to upgrade multifamily NYCHA housing in coastal areas to mitigate the effects of a storm like Sandy, but as Zarrilli pointed out, it's a complicated issue.

"That's what's been driving our land use analysis in coastal areas, to see what we need to do about density in those areas," Zarrilli said. "It's complicated for sure. It's not just a binary, you know, either buy out or not. In different areas I think the solutions are different."

"You have 400,000 people in New York who live in the floodplain. Many of them live in public housing, they're very vulnerable communities," Levine, the NYLCV spokesman said. "They built their families, they built their lives there, and they're an important part of the fabric of the city, both culturally and economically. It's really challenging to tell people to pick up and leave." 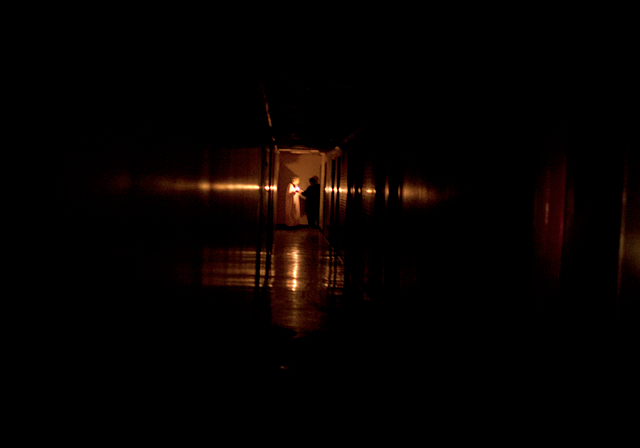 A woman lights a cigarette in the pitch black hallway of a housing project in Coney Island just a few days after Sandy. (Matt Richter)

Still, Levine noted, no matter what, there are some parts of the city that can't handle development. "On some places you're not going to be able to build. Buying back those properties is smart policy, even if it is a very difficult one for those families who are currently there," he said.

And though the climate change-combatting efforts are, of course, expensive—the city says it's spent $5 billion on resiliency projects over the last five years—the money we spend now prevents shelling out for damages in the future.

"To truly be prepared, it's capital intensive. I think it's just hard for a lot of folks to recognize the level of commitment needs to be made to be ready for the future," Ulfelder said. "By some estimates there's going to be an average of $5 billion a year in damage to New York City related to sea level rise and climate change. That is staggering, but it's hard to invest the money today to get ready for something that's out there and that of course is the collateral challenge that climate change represents."

Climate change can be mitigated, but at this point it probably can't be stopped. "This is just going to be a reality of the coming decades and centuries as the combination of storm surges and sea level rise makes these storms both more common and more catastrophic," Levine said.

#climate change
#hurricane sandy
#storm
#longform
#original
Do you know the scoop? Comment below or Send us a Tip