On Eve of NYC Visit, Pope Calls Americans "A People of Hope" 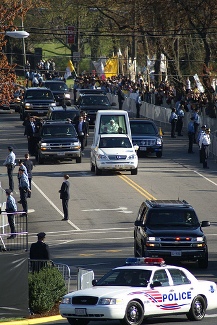 Pope Benedict XVI arrives at JFK Airport tomorrow, and the city is ready. Police will be checking subway train cars through his three-day stay, as well as using mobile radiation detection units and hand-held sensors to examine cars.

The Daily Intel asked Pastor Richard Baker, who directs the Cathedral of St. Patrick's Young Singers, for the advice he gave the children. For instance, one should address Pope Benedict "as 'Your Holiness.' Not 'Hey Pope' or 'Hello Pope.' 'Your Holiness' is how you refer to him all the time: 'Thank you, your Holiness,' 'It was a pleasure to meet you, your Holiness.' Or you could refer to him as 'Holy Father.' 'Holy Father, may I ask you, what did you have for breakfast this morning?'"

Yesterday, the Pope reiterated his "deep shame" over the U.S. Catholic Church's sex abuse scandal and also warned U.S. Bishops about the influence of secularism. At his mass at Nationals Park, Pope Benedict once again mentioned the sex abuse scandal, "No words of mine could describe the pain and harm inflicted by such abuse. Yesterday, I spoke with the bishops about this. Today, I encourage each of you to do what you can to foster healing and reconciliation, and to assist those who have been hurt." But the Pope has also called the country a "people of hope."

Shepherd One is expected to touch down at 9:45 a.m. at JFK; from there, he will go to the U.N. for a morning address. In the evening, he will visit St. Joseph's on the Upper East Side. AMNY has a good article on issues the Pope faces.

Photograph of Pope Benedict Popemobiling in D.C. by KJ Grabosky on Flickr

#Catholic Church
#d.c.
#papal visit
#pope benedict
#popepourri
Do you know the scoop? Comment below or Send us a Tip