A dispute at a downtown McDonald's escalated into a stabbing earlier this morning, and it appears the suspect is a security officer at the World Trade Center who was on-duty at the time. 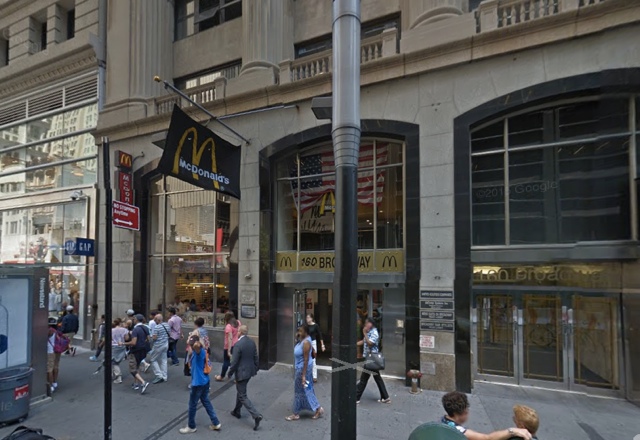 WABC 7 reports that the victim had allegedly been "throwing fries" at the guard. McDonald's manager Alan Garcia tells DNAinfo that some teenagers were antagonizing the suspect. "There was a group of teens ordering," Garcia told the website. "One of them got his fries and just put a fry on the security guard's head. It's ridiculous when you see someone act like that."

The argument turned physical and spilled outside the restaurant, with the suspect allegedly slashing the younger man in the chest and face. The suspect then fled, and the victim was taken to Bellevue, where he's in stable condition.

Responding police officers found the suspect at Vesey and Church Streets. He was taken to New York Downtown Hospital for a cut on his lip. Charges are pending.

#assault
#lower manhattan
#mcdonald's
#stabbing
Do you know the scoop? Comment below or Send us a Tip
A new Gothamist is coming! We’ve moved comments over to our beta site. Click here to join the conversation and get a preview of our new website.