Hundreds of people swept through the American Museum of Natural History on Monday as part of the second annual Anti-Columbus Day Tour. Through a series of mic checks, the group challenged the legacy of Theodore Roosevelt, the conservationist president memorialized there who championed the National Park Service and espoused racial hierarchies.

Decolonize this Place, NYC Stands with Standing Rock, Black Youth Project 100 and others have three demands: that New York City replace Columbus Day with Indigenous Peoples' Day; overhaul the museum with input from the Asian, African and indigenous people currently presented as mannequins and "cultural artifacts" behind glass; and remove Roosevelt's likeness from the museum's front steps.

There, Roosevelt sits ten feet tall on horseback flanked by an indigenous man and an African man in what NYU Professor of Social And Cultural Analysis Andrew Ross calls "an expression of a power relation."

"Psychologically we still carry our ancestors' trauma. We're still living through the trauma that we've always been facing," said Abby Rojas, an activist with NYC Shut it Down whose ancestors are part of the indigenous Nahuas people of Mexico. "Our education system doesn't teach you about Native Americans past the 1800s and I'm standing right here."

"New York City is Lenape land, and therefore celebrating Columbus Day on their land is really shameful," she added. "I have a lot of Lenape relatives and I know it's really a slap in the face to them."

Luis Bonnet participated in Monday's action a day after arriving in New York from hurricane-ravaged Puerto Rico. On Sunday, the Trump administration reinstated the Jones Act, which requires that supplies shipped between Puerto Rico and the mainland United States travel in expensive US-owned ships.

"What we are having right now in Puerto Rico is just an example, a live example, of the result of colonialism," Bonnet said.

There have been some big developments in the last year in the movement to address monuments to America's violent colonial history. President Trump has refused to condemn the white supremacists who rallied around a statue of Robert E. Lee in Virginia, even after one man in that group killed an anti-racist protester with his car. Confederate statues were quickly removed across the country, including in the Bronx, and Mayor Bill de Blasio announced a panel of artists, historians and activists to review all "symbols of hate." A petition for New York City to adopt Indigenous Peoples' Day like Vermont and Los Angeles have already done has more than 15,400 signatures as of this writing; New York Assemblyman Charles Barron introduced legislation last week that would do just that.

And last month, the AMNH announced a multi-year plan to "update, restore, and conserve" the museum's Northwest Coast Hall in the lead up to the museum's 150th anniversary.

"Over time, the Museum is committed to addressing aspects of its halls that don't reflect current understanding and scholarship," said spokeswoman Anne Canty. "The announcement included experts and representatives of First Nations communities in Canada and Alaska and the design of the hall will be undertaken collaboratively." 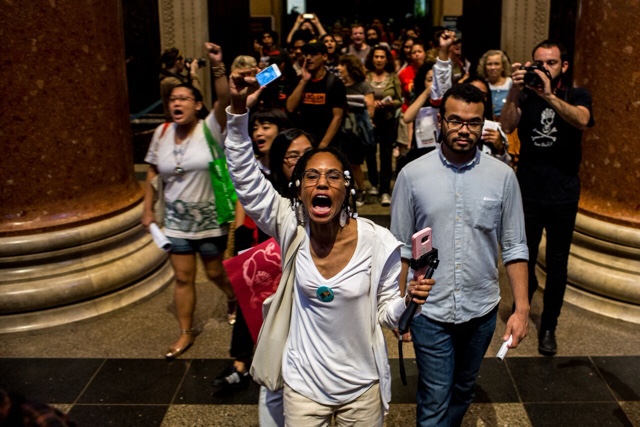 What an Anti-Columbus Day museum tour looks like. (Scott Heins/Gothamist)

Organizers have met with museum representatives over the last year. "The tenor of the conversations, if I could summarize it, is, 'We agree with you in every way," said Ross, the NYU professor. However, "We've asked them for more than words."

After marching in the Columbus Day Parade on Monday morning, Mayor Bill de Blasio said no city monuments will be imminently removed. A City Hall spokesman also confirmed Monday that the mayor has no plans to adopt the name Indigenous Peoples' Day. Since the summer, some Italian-Americans have accused him of disrespecting his own Italian heritage.

"I want to emphasize, nothing is going to change in a short term," de Blasio said. "I think some of the critics, possibly for their own purposes, have tried to gin this up."

"The museum believes that the statue needs to be addressed and several factors will figure into determining the exact approach," said Canty, the AMNH spokeswoman, adding, "the decision... is not solely in the museum's control."

Ilan Yahav, 33, bumped into the Anti-Columbus Day Tour while exploring the museum as part of his New York vacation from Tel Aviv. "I don't know," he said. "I mostly heard good things about Roosevelt."

"It's always the more progressive people who are trying to bring more justice to history and rewrite the narratives," he added. "I hope it works. Columbus is definitely very problematic."

On Columbus Day 2016, protesters managed to hurl a parachute over the Roosevelt statue, and stand on its base. Back in 1971, six Indigenous protesters splashed red paint on the statue and were arrested.

But this week the statue was ringed with police barricades. Dozens of police stood by with zip ties, while a small handful of Trump supporters attempted to shout over the speakers: "Trump 2020!" and "Build a Wall!" Protesters hoisted a massive red banner across the front of the Roosevelt statue printed with the words "Decolonize This City," but were moved off to the south side of the steps within minutes.

"It's way overdue," said Aru Apaza of Sunset Park, a descendant of the South American Aymara people. "We're going to pull them down if you don't take them down."

#american museum of natural history
#christopher columbus
#colonialism
#indigenous peoples day
#theodore roosevelt
#original
Do you know the scoop? Comment below or Send us a Tip