The MTA's foray into tap-to-go fare payment had a successful first day. The OMNY system welcomed 6,100 payments for subway and bus rides on Saturday, which was its first full day of service.

OMNY is being piloted on Staten Island buses and at 16 subway stations along the 4/5/6 lines, running from Grand Central-42nd Street to Atlantic Avenue-Barclays Center in Brooklyn. The subway stations accounted for most of the usage, with 5,900 rides. Two hundred OMNY rides were registered for the buses. 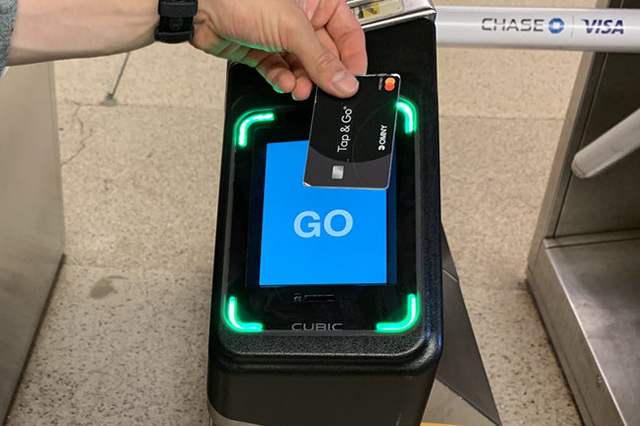 The MTA says that about 80% of OMNY users opted for a digital wallet app on their phone while 20% used contactless credit or debit cards. As for the success rate, less than 5% of the Saturday OMNY rides had to tap more than once, and the agency says that number should drop as customers become used to using tap payments and the MTA makes adjustments with credit card variances (apparently there are hundreds of kinds of contactless cards!).

There are even celebrity OMNY adopters!

The new iPhone update claimed that I can use my phone to pay for subway rides, and what, whaaat? - IT WORKS! #awesome #apple #phoningitin #thefuture #MTA #fourfivesix pic.twitter.com/WXZ7qXMYrQ

The MTA had originally been expecting 6,000-12,000 subway taps per week and 800-1,500 bus taps per week. But some commuters have been looking forward to OMNY. Monique Sanchez, a Staten Island resident, was disappointed when the OMNY reader wasn't activated on Friday morning (it went live at noon). She told us on Friday, "I feel like it might be easier. Honestly, now that the Express buses aren't taking coins, I feel like if you have a card, you just go."

The MTA did not have OMNY figures for Sunday at this time.

OMNY is being rolled out over four years and will completely replace the MetroCard by 2023. More subway stations and bus routes will be added later this year and into 2020, with all subways and buses to be "OMNYified" by the end of 2020. Metro-North and Long Island Railroad will be introduced in 2021, and, in 2022, OMNH vending machines will be installed at subway stations and commuter rail station.

"We’re thrilled that New Yorkers are adopting OMNY even quicker than expected, and that the first several days have gone so well," said Al Putre, head of the MTA’s New Fare Payment Program. "The more that people use the system the easier it will be for us to learn what’s working and what isn’t, ensuring that New Yorkers will get the system they deserve—one that saves them time and hassle as they go about their day."

#metrocard
#MTA
#nyc transit
#omny
#we the commuters
Do you know the scoop? Comment below or Send us a Tip