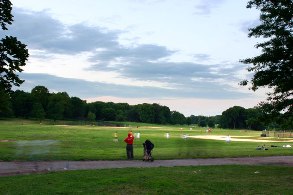 Police have arrested a man in connection to a string of sexual attacks in city parks in Queens and Brooklyn over a four year period. The Post and Daily News report that Alvin Henry, a sprinter who participated in the 2000 Olympics, representing Trinidad and Tobago, was arrested last night.

The rapist was being called the "lover's lane rapist" because he would target women in couples or who had just been with a boyfriend. Three attacks occurred in Queens, two in Brooklyn. According to the police and family, Henry traveled between Trinidad and New York; when he was in the city, he would, according to the Post, shuttle "between an aunt's house in Queens and a friend's house in Brooklyn." The police traced him by cellphone calls Henry made to an alleged 15-year-old victim, who was raped in Jamaica's Roy Wilkins Park three weeks ago.

Henry was charged with rape, sexual misconduct, and sexual abuse. When Henry was being taken from a Brooklyn precinct to a Queens station house (he was arrested in Prospect Park), told a reporter from the News, "I'm asking for your help."