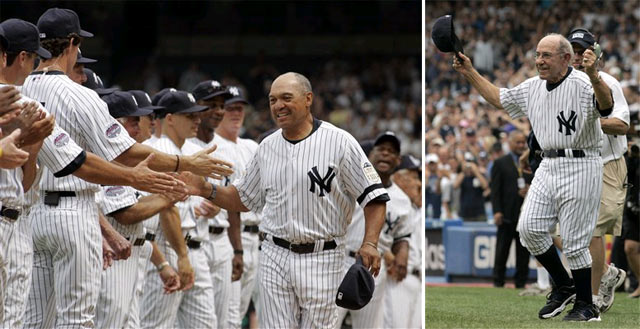 Before the Yankees' 8-2 win over the Angels, the Yankees brought back seventy-two past players for the 62nd Old-Timers' Day at the old stadium. Recent beloved players like David Cone, Paul O'Neill, Tino Martinez, Darryl Strawberry and David Wells were welcomed loudly, while legend and fan favorite Yogi Berra received his traditional cheers. Reggie Jackson, Don Larsen and recent Hall of Fame inductee Goose Gossage were also on hand, as were Rickey Henderson, Ken Griffey Sr. and Jim Abbott. 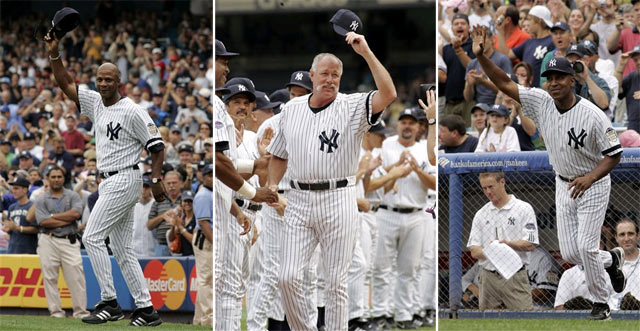 However, the show was stolen by Willie Randolph. The recently-fired Mets manager got the biggest ovation, and emcee Michael Kay said, "Once a Yankee, always a Yankee." Randolph said of Yankee Stadium:

"This is still one of the most special places. I grew up here, I learned my chops here, I learned to be a winner, a champion here. I get to sit here the whole day and go through the memories I experienced. These are my boys. This is a family and I'm happy to be part of it today."

Tino Martinez thought the fans were great for the reception they gave Randolph, "Willie deserves it. That's why these are the best fans in the world. You want to applaud them for doing that." And when later asked about the Mets, Randolph said, "Those are my guys. There’s a big part of me, and that’s my team. I led that team back to where it is today, so you don’t just let that go.”

The NY Times has more about yesterday's Old-Timers' Day and the Daily News and Post have photo galleries.