A few months still sit between us and beach season, plus today is windy and unreasonably cold, so I don't imagine you have big shore-going plans on the horizon. Just in case, though, please stay out of and away from the water because it has been barfing up tar balls all weekend, probably due to its accidental ingestion of fuel leaked from a container ship.

On Thursday, the Dublin Express spilled an unknown quantity of fuel from its 300,000 gallon tank into Arthur Kill waterway, thanks to a 15-square-inch hole in its hull. Watchstanders caught the leak while the ship was moored at the Global Marine New York Container Terminal off Staten Island; responders hauled the wounded vessel up onto a containment boom and temporarily closed down the port so they could skim the surrounding waters. As of Friday evening, the Coast Guard said it had sent "60 responders, 10 vessels, four skimmers, two vacuum trucks, two vacuum trailers for recovered oil product, and 15,000 feet of containment boom" to deal with the incident.

By Saturday, however, the Coast Guard had received reports of "oil sheen and tar balls" in the waters off of Coney Island and Long Island, from Norton Point to Atlantic Beach. The Coast Guard deployed flight crews to survey the situation from the air, along with its Shoreline Cleanup and Assessment Technique (SCAT) teams to investigate on the ground. They spotted a swath of tar balls about 400 feet long and 2 feet wide on Jacob Riis beach in the Rockaways on Sunday, and today, Unified Command will send out "crews proficient in the cleanup of tar balls" to tackle the infestation once "the tide is favorable," according to a news release.

Captain Jason Tama, commander of the Coast Guard's New York Sector and its federal on-scene coordinator, emphasized in a statement that the agency and its partners—which include the Atlantic Strike Team and members of the New York State Department of Environmental Conservation—"took aggressive steps investigating and confirming [tar ball] reports." They will keep up their response efforts to ensure "the safety of the public, wildlife, and the environment," but urge anyone who finds themselves on the beach today not to pick up any tar balls they may find. Instead, you are urged to call 866-601-5880 with any relevant reports, and to wash yourself with warm soapy water if you fail to heed these warnings and go for the tar balls, anyway. The tar balls look fecal and unappealing, so I'm not sure why you would try to handle them, but for reference, avoid anything that looks like this: 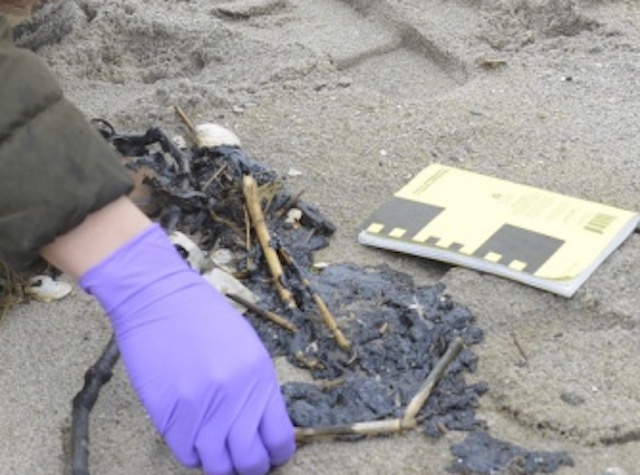