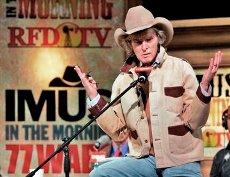 Don Imus, who was fired from his CBS morning radio show after insulting the Rutgers' women's basketball team, is back in the spotlight today.

When Warner Wolf was discussing football player Adam "Pacman" Jones desire to drop the "Pacman" nickname (because of his many brushes with the law), Imus asks, "What color is he?" To which his sidekick says, "He's African-American." Then Imus said, "Well, there you go. Now we know."

While some wonder if this was another racist remark from the curmudgeonly radio personality, Imus told the NY Times, “I meant he was being picked on because he’s black." Imus added, "that Dick Gregory, a veteran comedian and activist who is black, would be a guest on his show on Tuesday, to discuss the death of George Carlin" and that he'd see what Gregory thought. The Reverend Al Sharpton said the remarks were "disturbing because it plays into stereotypes."

You can listen to the clip after the jump - if someone knows where a longer clip is, with more of the after-the-remarks discussion, let us know in comments (Imus did specifically hire two black sidekicks). And when he returned to the airwaves, Imus promised, he would "never say anything in my lifetime that will make any of these young women at Rutgers regret or feel foolish that they accepted my apology and forgave me.”