Elected officials joined safe streets advocates Sunday evening to mourn the second child killed by a New York City motorist in less than a month, and to demand that Mayor Bill de Blasio step up efforts to make streets safer for walking and biking under the city’s Vision Zero initiative.

The driver of a commercial van ran over 3-year-old Emur Shavkator as the child and his mother crossed the street near their home in Bath Beach last Thursday afternoon. According to the NYPD, 61-year-old Johnny Gonzalez—also identified as Juanchi Seda in some media reports—was making a right turn from Bay 25th Street onto Benson Avenue when he hit Emur, who was riding a foot-scooter in the marked crosswalk on Bay 25th. 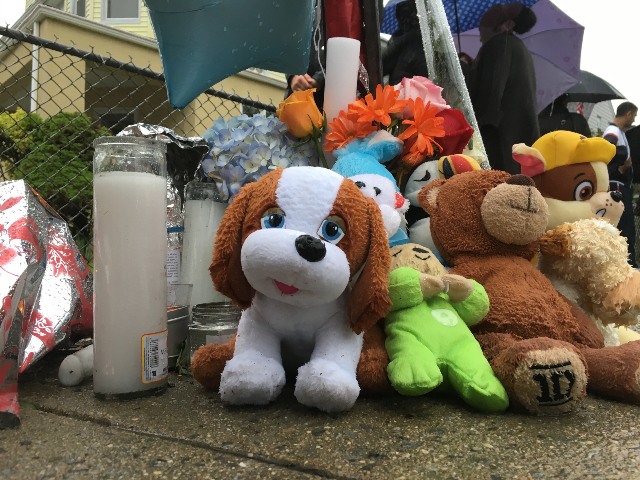 Police charged Gonzalez with failure to exercise due care and failure to yield to a pedestrian. Under the city’s Right of Way Law, Gonzalez is subject to a maximum penalty of 30 days in jail and a $500 fine, though Right of Way Law cases are normally pled down to a reduced fine with no jail time.

Gonzalez blamed the toddler and his mother for the collision.

“I want to say that I find it preposterous that there are those who have said that somehow the child or his family was responsible,” said Councilman Mark Treyger at Sunday’s event. “Make no mistake that this was a preventable tragedy. We should not be burying our children, our loved ones.”

Shavkator was the second child killed by a New York City driver this year, according to Transportation Alternatives. In April, a motorist pinned 7-year-old Cameron Brown to the back of his school bus on Gipson Street in Far Rockaway. Last year city drivers killed nine children under age 18, according to the advocacy group.

Despite a steady rain, dozens of local residents and members of the Uzbek community stood with Treyger, other electeds and members of Families for Safe Streets at the site of the crash. Congressman Max Rose, State Senator Andrew Gounardes and Assembly Member Bill Colton also spoke at the vigil, which drew enough people that the NYPD had to close Bay 25th Street to drivers to accommodate the crowd. Shavkator's immediate family were not in attendance.

“There is something about the Department of Transportation studies that really lack the sense of moral urgency,” Treyger said. “When they collect their so-called data points, how they could not have picked this up time and time again? I have messages to DOT from 2014, 2015, 2016 and so on, about how dangerous this intersection is and continues to be.”

Last week Treyger’s office told Gothamist that the DOT denied multiple requests from the council member to add a traffic signal at Bay 25th and Benson, as drivers routinely ignore the stop sign there. Traffic signals are not the be-all end-all of street improvements—research shows they can actually make intersections more dangerous—but other than conduct traffic studies, the DOT took no tangible action in response to Treyger’s call for safety measures at the crossing.

“The way DOT currently approaches its street design doesn’t work,” Tom DeVito, director of advocacy for TransAlt, told Gothamist yesterday. “They could daylight these intersections [or] do some curb extensions. There’s a half a dozen very minor things that they could do.”

After Shavkator’s death, a DOT spokesperson told Gothamist the agency is “looking into potential safety enhancements” where the child was hit. 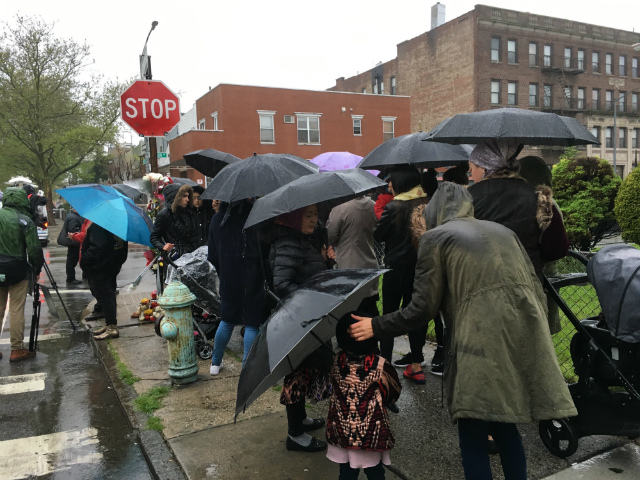 On Sunday advocates again called for passage of the Vision Zero Street Design Standard bill, which would require the city to publicize a list of proven life-saving design elements whenever a street is redesigned. The bill has 43 co-sponsors, according to Transportation Alternatives, but Mayor de Blasio has not signaled support.

“If we had passed this bill last year, we wouldn’t be seeing the increase that we are with traffic fatalities,” said Amy Cohen, who co-founded Families for Safe Streets after her son Sammy was killed by a Brooklyn driver in 2013. “Someone like this beautiful light of a boy is killed in New York City every single day. And it’s gotta stop.”

NYPD data show that city traffic deaths are up 30 percent compared to the first four months of 2018. The day after Shavkator was struck, 52-year-old Charles McClean was killed by a postal service driver as he crossed MacDougal Street in Bedford-Stuyvesant. No charges were filed.

Advocates will gather on Tuesday to demand passage of the Vision Zero Design Standard bill. The rally begins at noon on the City Hall steps.

“It’s an urgent epidemic,” said Cohen. “It demands immediate action and we must pass this bill now.”

#bath beach
#Emur Shavkator
#vision zero
#original
Do you know the scoop? Comment below or Send us a Tip