In case you haven't noticed, the Catholic Church's Supreme Pontiff is bopping around New York City today. Pope Francis arrived last night, slept in a townhouse on the Upper East Side, then started today with an address at the United Nations. His schedule includes a visit to the 9/11 memorial, followed by a trip to a school in East Harlem, then a procession through Central Park, and mass in Madison Square Garden. (Afterparty at Billy Marks!)

We'll update this throughout the day, with the newest stuff up top, until our souls are purified in the fiery crucible of traffic congestion and crowd control. We can't promise this will be better than that time we liveblogged the Woody Awards, but we will do our best.

6:14 p.m.: Jen Chung got into the park—thanks to a kind white shirt police officer—and took this video of the Holy Father:

The @Pontifex is now making his way through Central Park. #PopeinNYC pic.twitter.com/2DsYuPrdsR

time to get from end of MSG line to the middle: 2.5 hours. "But only because people were cutting," one couple says

And a tricked-out Popemobile!

4:26 p.m.: According to the Fox 10 live feed, Cardinal Timothy Dolan just tried to put his hat on Dante de Blasio who, for some reason, is not at school.

I love Dante de Blasio's afro next to the pope. pic.twitter.com/QqdvieURCL

4:04 p.m.: The Pope has made it uptown, where children are singing "When The Pope Goes Marching In":

#PopeFrancis has arrived at Our Lady, Queen of Angels school in Harlem! #PopeInNYC #PopeInUSA pic.twitter.com/gOjoFh1zYX

.@Pontifex having fun in Harlem, asking the kids to sing louder. #PopeinNYC pic.twitter.com/lguWHex9Eo

But things are getting nuts over at Columbus Circle, where people are waiting for the Pope's parade to show up at 5 p.m.: 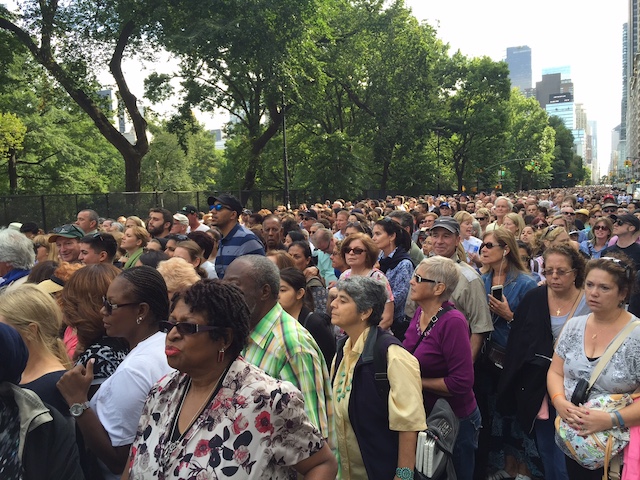 On the bright side, some lucky line-dwellers got to hear Pearl Jam's soundcheck for tomorrow's Global Citizen Festival, which will also be held in Central Park. Better than the dulcet sounds of singing children? You be the judge!

And things are a little quieter—nay, ghostly, a little further up CPW:

Pope just passed in his Fiat!! Check it out #PopeFrancisNYC #pope pic.twitter.com/LvNP5Z7gkV

People are using puppy pee pads to sit on and keep their belongings clean from the ground. Improvising at it's best. #popenyc -Katie Barner

3:17 p.m.:Christopher Robbins is scoping out the hordes of humans swallowing 7th Avenue whole, as they await the Pope's evening Mass at MSG. It doesn't look pretty:

Both sides of 7th Avenue are covered with people waiting for the Pope's mass at MSG pic.twitter.com/lPEH09bf87

yep, the end of the MSG line is at 7th Ave and West 28th Street pic.twitter.com/EfRBQw9eBV

These nuns were struck with enough divine power to cut the line:

Meanwhile, by Columbus Circle, we spot a Daily Show correspondent.

On 6 train, another conductor cautions of delays because of "Popal activity"

The rumors are true: no beer sales at the MSG @pontifex pregame. #PopeInNYC #diretidings @WNYC pic.twitter.com/vzZlQoDjYs

2:46 p.m.: The Pope is still resting. Not resting, however, are all the people trying to cram into Central Park right now:

Take a look at (just a small part) of the line of people waiting to get into Central Park to see @Pontifex #PopeinNYC pic.twitter.com/M1iwqlLHw0

People near me are fighting for a spot standing on a root because it offers a 3 inch higher view. Heat is getting to people. #PopeinNYC

Monks on A Train: is this a meet cute or what?! #PopeinNYC pic.twitter.com/kdm1DrU7iy

Also, if you thought security is tight here, Philly is quite...prepared. Is it Holy War time?

2:04 p.m.: In case you were planning to take the subway to Columbus Circle today, don't!

Security is super tight over at Central Park, where bringing your drone is ill-advised.

Meanwhile, lines rivaling even the fiercest iPhone/Cronut mashup are beginning to form at Madison Square Garden, where the Pope will deliver Friday Mass this evening.

I'm told the #PopeinNYC line stretches all the way to 14th Street, meaning it's a mile from MSG #abc7ny pic.twitter.com/GoNykrjjQo

Wow, crews vacuuming all white altar and preparing for #PopeFrancis Mass at #MSG. Reports from me soon on @ny1. pic.twitter.com/c19vkzAz1D

1:51 p.m.: His Holiness is having a little rest before visiting the schoolchildren, but the Central Park line-waiters are holding strong:

And you thought the #iPhone6s line was long. This is the crowd trying to see the #PopeInNYC at Central Park. pic.twitter.com/8NleHeoapp

Now seems like as good a time as any to remind you that the Pope will be releasing a prog- rock album, Wake Up!, later this year.

And here is a very happy priest:

At least there weren't any selfie sticks as #PopeFrancis arrived... #PopeinNYC @DNAinfo pic.twitter.com/F0EVk2SxCz

(Don't worry, there were selfie-sticks.)

Meanwhile, it appears the Pope's visit has sparked new spiritualism here in NYC:

Bartender arguing with patron about whether missing Sunday Mass then receiving communion following week is a mortal sin. #PopeInNYC

1:04 p.m.:Jen Chung is on the scene at Central Park—she shot video of a portion of the Pope Parade-awaiting line from 67th to 64th Street on Central Park West, which you can see below:

12:51 p.m.: Not even nuns are spared security patdowns. Sorry, Sister!

Holy security check in #Harlem. No one's getting past these guys! #PopeinNYC @fox5ny pic.twitter.com/xdxqQkquLS

On the bright side, buying a Pope button will get you a "soft cloud in heaven." Capitalism is #blessed after all!

Pope button seller in Times Sq. He said buying one ($2) gets you "a soft cloud in heaven." #PopeInNYC @WNYC pic.twitter.com/l2KKy1suYI

12:32 p.m.: The Pope has left the 9/11 Memorial and is now on the move, much to the chagrin of Condé Nast employees craning to get a look at him from their 1 WTC perch:

All of Condé Nast looking down on the Pope like, “Who are you wearing?”

For the record, he's wearing white.

The Pope is heading uptown to visit a third grade class at Our Lady Queen of Angels school in East Harlem—Secret Service agents are preparing for his arrival.

12:20 p.m.: For those of you who've dreamed of a post-apocalyptic Madison Square Garden, wonder no more!

12:03 p.m.: New Yorkers, tourists, believers and non-believers all love to wait on lines:

Line to get into Central Park stretches BLOCKS! #PopeinNYC pic.twitter.com/uEvwqggnKd

LOOK AT ALL THE PEOPLE.

And over at the 9/11 memorial, selfie sticks begin to make an appearance:

West St is packed. Selfie sticks poking up over the crowd every now and then. #PopeinNYC pic.twitter.com/SQAs9L8Ubt

Embrace of a Muslim and a Jew at interreligious service at #groundzero with #PopeInNYC pic.twitter.com/F6T2gQIg2y

11:30 a.m.: The pope is at the WTC memorial now, and he just blessed one of the reflecting pools. You should be able to watch his interfaith meeting via YouTube livestream starting at noon NOW:

This lot is here at the WTC memorial #PopeinNYC pic.twitter.com/prF0AqSxhy

Something different: The WiFi network at the NYC media center for Pope Francis' visit is "Habemus Papam" (We have a pope). #PopeinNYC

#liveblog
#pope francis
#pope in nyc
#original
Do you know the scoop? Comment below or Send us a Tip