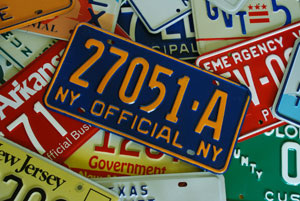 The saga of the issuance of Official New York license plates to people, businesses, and groups that are not a part of the government continues. Yesterday, the Daily News followed up with a story about how the New York Public Library received several sets of the plates for its vehicles. In case you didn't know, the New York Public Library, Brooklyn Public Library and Queens Borough Public Library are not a part of the city government, but instead are all private nonprofit corporations that get funding from the federal, state and city governments unlike some other libraries in the state which are directly part of local government. And of course the News mentioned they found vehicles with the Official plates parked illegally and free of parking tickets.

The Lindenwood Volunteer Ambulance Corps, one of the groups mentioned in the original Daily News article, issued a statement on its website:

6/12/07 - Lindenwood Volunteer Ambulance Corps (VAC) is a non-profit all volunteer EMS provider serving the communities of Ozone Park, South Ozone Park and Lindenwood for over thirty years. Lindenwood VAC was unaware of any improprieties in its recent registration of its marked response vehicle, until the Daily News article published on June 12, 2007.

Lindenwood VAC only recently added its first non-ambulance vehicle to its fleet of two ambulances and was unaware this marked and NYS Dept of Health certified vehicle was possibly plated incorrectly, as numerous volunteer EMS and Fire Departments within the City and neighboring counties were afforded “official” plates routinely. Lindenwood VAC never falsely represented itself as being other than a non-profit volunteer EMS provider to any city or state entity, including DMV officials during the registration process of the vehicle in question. Lindenwood VAC will fully cooperate with state officials for a swift resolution of this matter.

To ease registration confusion in the future, Lindenwood VAC feels that there should be some type of special plate for emergency vehicles that do not fall into current plating system. Similar to the “ambulance” plates issued, DMV should explore another registration type such as “public safety” or “emergency vehicle” or a general “exempt” registration type, for organizations that provide emergency services but whose vehicles are not government owned.

We did a review of some other states license plate issuing procedures reveal that several other states issue non-governmental emergency service providers plates that are not as specific as New York's Ambulance plate. For example, Virginia issues a Rescue Squad plate and Pennsylvania issues an Emergency Vehicle plate to organizations similar to the Lindenwood Volunteer Ambulance Corps for their response vehicles. Perhaps this whole mess will be the impetus for New York to come up with new types of license plates for these groups that are in these grey areas.