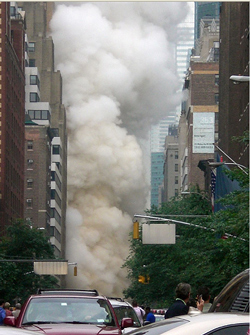 Tenants of the office building at 370 Lexington Ave. and East 41st St. are alleging that while they were barred from the building for more than a month during clean-up and decontamination of the area following July's midtown steampipe explosion, their offices were looted of cash, cellphones, electronics, and other portable valuables. The New York Post talked to the president of a graphic-arts company located in the building, who found that approximately $45,000 in items had been stolen from the firm upon returning to its offices in August after six weeks. Stolen items included 12 laptops, every digital and video camera, iPods, memory sticks, as well as cash. He described the robbery as methodical. Other tenants at 370 Lexington complained of similar robberies.

According to the paper, it is unclear who committed the robberies, when they occurred, or how items were removed from the building. In the first two weeks after the explosion, not even the landlord or its employees were allowed to enter the building because it was under the control of city authorities. During that time, dozens of people working for a number of local and federal agencies were in and out of the building in a clean-up site that was operating 24 hours a day. The agencies include the NYPD, FDNY, Office of Emergency Management, the city Environmental Protection Dept., the Buildings Dept., the Health Dept., the Environmental Protection Agency, and Con Ed.

A police official said that there have been 14 complaints of theft from buildings around the steampipe explosion and 11 of those complaints originated at 370 Lexington. Of the 11 complaints from that building, eight are classified as grand larceny. Other tenants of the building say that they simply haven't filed police reports yet.

Separately, we are happy to report that Gregory McCullough, the 21-year-old tow truck driver who was directly over the steampipe when it exploded, is out of his medically induced coma and can now communicate with family members. Doctors credited his young age and good physical condition with his survival, after he was burned over 80% of his body by the erupting steam.