A plainclothes police officer is wounded and an armed suspect is dead following a chaotic shootout in Washington Heights on Thursday afternoon.

According to the NYPD, the incident began just before 4:30 p.m., when police officers received reports of a man firing a gun into the air at 187th Street and Wadsworth Avenue. Two plainclothes police officers in the area then spotted a man matching the description and allegedly carrying a weapon. Police say one of the officers exited the unmarked car and began pursuing the man up 187th Street.

The suspect ran into a parking lot on Broadway, hiding behind a car and firing three rounds at the officer, one of which struck him in the armpit. The wounded officer managed to fire a shot at the suspect, police said.

During this exchange of gunfire—which is partially captured by security cameras—the officer's partner arrived at the scene, taking cover behind one of the nearby vehicles. The suspect allegedly continued shooting, putting a bullet through the windshield of the unmarked police car. The second officer also opened fire, shooting the suspect in the chest. 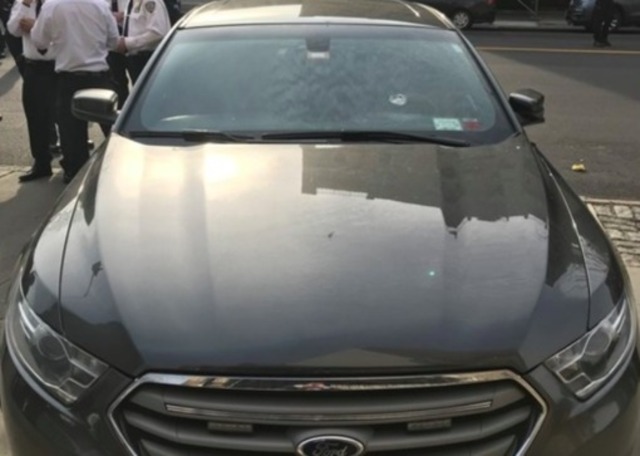 A bullet hole left in the windshield of an unmarked police car. (NYPD)

The suspect was pronounced dead at Columbia-Presbyterian at 5:10 p.m. The officer was transported to Mount Sinai Hospital, and is currently in stable condition.

During a briefing on Thursday night, Police Commissioner James O'Neill said the courage shown by the wounded officer was "quite unbelievable."

"The subject has a gun in his hand, they run into the parking lot, and, at close quarters, they exchange shots," O'Neill told reporters. "It’s pretty amazing to see."

Mayor Bill de Blasio visited with the 34th precinct officers and said he found them in good spirits. "These officers did everything right to protect the people of this community, put themselves in harm’s way, and thank God they’re going to be okay," the mayor told reporters. "But it’s a reminder, again, as the Commissioner said, of the dangers that our officers face."

The incident marks the second time that a police officer has been shot on the job in 2019. In the first instance, Detective Brian Simonsen was killed by friendly fire while responding to a robbery in Queens.

The NYPD has not yet released the names of the officer or the gunman involved in the shooting.

#james o'neill
#mayor de blasio
#nypd
#police shooting
#washington heigihts
Do you know the scoop? Comment below or Send us a Tip