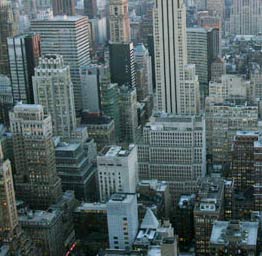 Members of the union marched from Times Square to to Rockefeller Center yesterday, calling on owners to meet their demands. According to reports, SEIU 32BJ says that rents have risen 26% in the past year, while building cleaners' salaries have dropped 5% since January 2005. Union president Michael Fishman said, "“The time has come to bring workers’ wages back in line with the rising cost of living in New York. With New York City’s commercial real estate industry booming, there is no excuse for holding back on the wage increases these hard working men and women need to get by in New York.”

On the other side, building management feels they have fairly compensated workers. Counsel to the Realty Advisory Board Paul Salvatore told the AP that the subprime mortgage crisis might cause bigger problems for the real estate industry, "we have to do what's fiscally responsible for the industry, which could be facing a very stormy, choppy period." Like the workers won't be affected by the subprime crisis either!

A strike would affect 2,000 buildings, including the World Financial Center and MetLife building. Buildings have apparently been briefed about what to do in case of a strike - building managers will have to clean their bathrooms and prepare trash for pick up. Negotiations between the two sides will resume later this year.