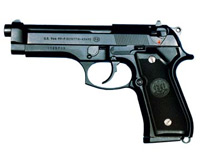 A day after police officers fatally shot a man who reportedly fired at them, off-duty law enforcement officers used their weapons to fire upon armed men.

In Brooklyn, an off-duty correction officer had been wheeling his motorcycle in his garage last night around 11 p.m. when an armed man appeared. Police believe the man wanted to steal the bike and said that the off-duty officer fired at him, hitting him in the cheek. The suspect is in the hospital.

Another off-duty corrections officer, who was getting gas in the Bronx around 2 a.m., approached by a man asking for directions. Then the man, per the NY Times, "suddenly entered the passenger side of the officer’s car, pulled a gun and demanded that the officer drive them away." After the struggling to get the officer into the car, the officer used his gun and fatally shot the suspect.

And in Queens around 2:00 a.m., an off-duty police detective tried to stop four men beating someone. One of the attackers fired at the detective (who had previously said he was a police officer) who then fired four times at the suspect. The attackers ran away, but two were found at a hospital and arrested.

Earlier this year, an off-duty corrections officer was killed during a robbery attempt at his Brooklyn home. And last week, an off-duty police officer was not indicted, though he had confessed, in the killing an unarmed driver in a 2007 road rage incident.