The driver whose apparent attempt to run over a defiant cyclist with his car sparked controversy this week—and raised questions about why cops at the scene did not cite him in the incident—is an FDNY firefighter.

Brauley De La Rosa, a five-year veteran of the fire department and U.S. Army reserve officer, confirmed to Gothamist on Friday that he was the motorist in the confrontation, which took place on the West Side Highway near West 24th Street on Thursday morning. Reached by phone, he denied any wrongdoing, and disputed a witness's narrative of the events—that he was driving recklessly, then became aggressive when confronted by the cyclist and attempted to assault him.

Driver almost hits biker. Biker gets confrontational. Driver takes biker’s phone, proceeds to run him over. Driver should be in jail along with his https://t.co/sKsyCSRCTZ shirt. pic.twitter.com/4O5LGT0Pnl

"The guy hit my car with his bike and then wouldn't move," he told Gothamist. "I was just trying to get out of the way [so] traffic could continue on."

"I'm in awe. I can't believe it," De La Rosa added, referring to the mounting public outrage over the confrontation, in which he appears to use his Dodge Challenger to deliberately ram a cyclist. "It's totally blown out of proportion."

In a post for Barstool Sports, Liz Gonzales said that she saw the driver blow through a red light, nearly hitting the cyclist and at least two pedestrians. When the cyclist approached the vehicle, the driver became furious, and allegedly smashed his cell phone, according to Gonzales. The cyclist told her afterward that he'd refused to move out of the way because the enraged driver was holding onto his phone.

The #NYPD gave my husband a $190 ticket for rolling through a red light on his bicycle, but let this motorist off scot-free after he attempted to run a cyclist over with his car ¯\_(ツ)_/¯ https://t.co/VtxLzV81rZ

The video shared by Gonzales—and a longer clip at Barstool—ends as police officers pull up to the intersection. "What was a surprise was how little the cops did when they arrived," she wrote. "They pretty much just showed up to clear up the traffic jam and let the muscle car bruh drive off...No tickets. No arrest. Just a quick, 'move it along.'"

That footage and testimony has generated outrage from safe streets advocates and some elected officials, who questioned why police officers elected not to cite the driver. A few people speculated that the motorist may have been a member of the NYPD, or "cop-adjacent."

Asked on Friday whether his position in the FDNY may have contributed to the police officers' decision to let him leave the scene, De La Rosa declined to comment, saying he had to speak to his union representative.

A Google Street View image of a Dodge Challenger parked outside De La Rosa's listed address in Yonkers shows an FDNY insignia on the windshield and what appears to be an "Active Firefighter" placard on the dashboard. 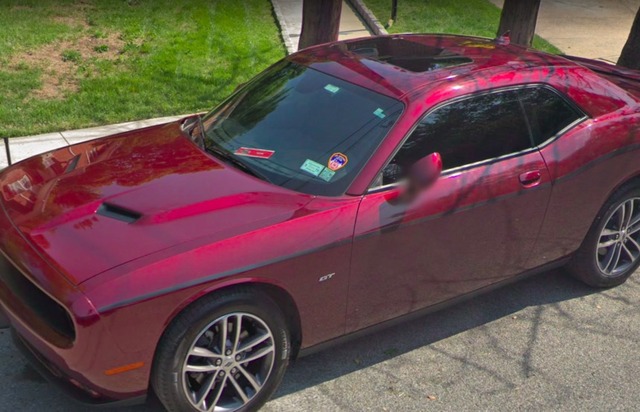 Multiple inquiries to the NYPD—including whether they've opened an investigation into the incident—were not returned. A spokesperson for the FDNY declined to comment on the record, citing the absence of a police report.

City Council Speaker Corey Johnson, who represents the district, tweeted on Friday afternoon that he was in touch with the NYPD about the "disturbing" video, adding that the "driver must be held accountable." A few hours later, two detectives reportedly showed up at Gonzales's office to interview her about what she witnessed.

On Monday, Brooklyn Councilmember Antonio Reynoso will join safe streets advocates on the steps of City Hall to demand an investigation into the incident. They'll also call for the installation of right-of-way cameras to catch drivers who fail to stop for pedestrians, which they say would "bring a measure of transparency to our roadways and help ensure that reckless, dangerous drivers are held accountable for their actions."

A spokesperson for the Mayor's Office did not respond to Gothamist's request for comment; we'll update if we hear back.

UPDATE: On Monday 6/10 @ 1pm I will gather w/ @TransAlt, safe streets advocates & NYC bikers on the City Hall steps to call for this driver to be held accountable & for right-of-way street cameras in NYC. https://t.co/7WS9Fohyvb @Gothamist @jangelooff

UPDATE: 6/08/19 Following publication of this article, a spokesperson for the FDNY, Myles Miller, told Gothamist, "The department is investigating the incident."

UPDATE: 06/10/19 A spokesperson for the NYPD told Gothamist on Monday that the incident is under investigation. According to Detective Denise Moroney, "An unknown male victim was riding a bicycle when he got into a verbal dispute with the operator of a vehicle which escalated into a physical altercation in which the driver of the vehicle makes contact with the victim. The bicyclist and driver leave the scene before police respond."

A second angle of the confrontation, posted by Gonzales earlier this morning, shows an NYPD Traffic Enforcement Agent recovering the cyclist's cell phone from De La Rosa, before permitting him to drive away. There is also a police van belonging to the Manhattan North precinct at the scene, though it's unclear whether the van was occupied by police officers or the less powerful traffic enforcement agents, who are civilian employees. (Asked about this, a spokesperson for the NYPD said they're "looking into the matter.")

Ran into the guy who witnessed the hit from the opposite side of the street. His footage shows the cop asking the driver (off-duty FDNY) to give the cyclist back his phone, AFTER he tried to run the biker over, & letting him drive away w/out consequence. Complete & total bullshit pic.twitter.com/sONCMDByeD

In a statement to Gothamist, a spokesperson for the Mayor's Office said, "Absolutely no one is above the law. The Police and Fire Departments are currently investigating to determine exactly what happened and once a determination is made, appropriate action will be taken.”

#bikenyc
#brauley de la rosa
#cyclist
#nypd
#vision zero
Do you know the scoop? Comment below or Send us a Tip