Off-Duty "Drunk" Yet Heroic Detective Put Back on Duty 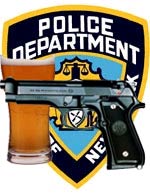 An off-duty detective who ended up wounding a man who fired upon him was initially sidelined from the force, for having a blood alcohol level of 0.09, slightly higher than the legal limit for driving. But now Police Commissioner Kelly has praised him as a near hero.

The Post reported that the detective, Ivan Davison had been "placed on modified duty and stripped of his weapon," after the shooting incident. Davison tried to stop a group of men beating a person and one of the attackers, Stephen Allston, had fired at him. So Davison fired back, hitting Alston in the arm and leg.

But this morning Police Commissioner Kelly reversed the decision, saying, "At grave personal risk, Detective Ivan Davison took appropriate and courageous police action to end an imminent threat of death or serious injury to himself and others...As the shooting was investigated, witnesses were located and the facts became known, it became apparent that the shooting was within department guidelines."

However, the Detectives' Endowment Association's Michael Palladino said the initial treatment meant, "When you are off duty, act in a civilian capacity. Get a good description, call 911 and allow the crime to continue." He faulted the NYPD for executing "two warrants on a detective who most likely had saved someone's life." As for Allston, he was charged with attempted murder, and his friend, Rasheem Anderson, was charged with gang assault.

#nypd
#off duty cop
#off-duty shooting
#police commissioner kelly
Do you know the scoop? Comment below or Send us a Tip