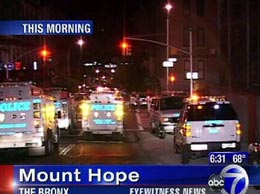 An off-duty corrections officer was reportedly shot four times in what WABC 7 calls "an apparent gunfight with several men." The officer had been walking home around 1:45 a.m. and the shooting occurred at 1791 Walton, at East 175th Street.

The officer was found by police, who had responded to a 911 call about gunfire--witnesses told WNBC "they heard as many as a dozen shots ring out." The victim, who may have also fired, had four gunshot wounds, two in the arms and two in the buttocks, and was taken to the hospital in stable condition.

The officer is assigned to Rikers Island. Police are looking for suspects, as well as a motive for the shooting.