Off-Duty Cop Stops Mugging, Gets Shot, Then Chases Down And Kills One Shooter

An off-duty police officer with "remarkable marksmanship" survived a dramatic shooting last night in the Bronx that left one of the suspects dead from a gunshot wound to the head. Officer Ivan Marcano, 27, is currently in stable condition at Bronx-Lebanon Hospital Center, but as of last night the bullet was still lodged in his chest. According to the NYPD, the bullet entered the left side of his chest, nearly striking his heart, then ricocheted and fractured one of his ribs before lodging in his right side. Last night at the hospital, NYPD Commissioner Ray Kelly provided this harrowing account of the incident:

At approximately 6:30 this evening, off-duty Police Officer Ivan Marcano was a passenger in the seat of the car that he owned in front of 1898 Harrison Avenue, when his girlfriend, in the driver's seat, observed two men robbing a third. She drew Officer Marcano's attention to what she had just seen. Officer Marcano told her to call 9-1-1, and he exited the vehicle, took out his shield and gun and identified himself as a police officer.

As soon as he did, one of the suspects fired, striking Officer Marcano in the chest. The suspects fled in a car as Officer Marcano, now wounded, climbed back into the passenger seat of the car, with his girlfriend behind the wheel. A block north, at the intersection of Burnside Avenue and Harrison, Officer Marcano's girlfriend, intent on getting him to the hospital, sounded her car horn several times.

There were three vehicles in front of her, stopped for a red light. The white Mustang immediately in front of her lurched forward, striking a black livery car, hitting another parked car, and careening onto the sidewalk, where it came to a stop. The three suspects from the shooting got out of the Mustang.

Realizing that they were the robbery suspects, Officer Marcano got out of his car and took cover two car lengths away from the suspects. Holding his left hand over his wound, with his gun in his right hand, Officer Marcano moved to the middle of the street, took cover behind the livery cab, yelled to passersby to "get down," and fired. He moved a second time, still holding a hand over his wound, to the west side of Harrison Avenue, where he took cover behind a parked car and fired another round at the suspects.

In a remarkable display of marksmanship and cool under fire, Officer Marcano fired, striking one of the suspects in the head. He died on the sidewalk next to the Mustang. Officer Marcano had fired one-handed as he used his other hand to continue to apply pressure to his wound. The suspect's two accomplices split up, fleeing east and west on Burnside Avenue. 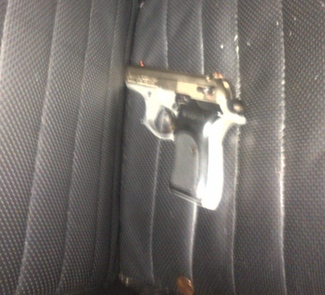 The 380-caliber semiautomatic recovered at the scene.

The two remaining suspects, who stole approximately $80 from their victim, remain at large, and the organization Citizens Outraged at Police Being Shot (COP SHOT) is offering a $10,000 reward for information leading to the arrest and conviction of the suspects. Anyone with information is asked to call the 24-hour COP SHOT hotline at 1-800-COP-SHOT.

According to the Times, last night "dozens of police officers, some wearing riot gear, converged on the area Wednesday night, blocking off streets as they searched for the two suspects. Some residents complained that they could not get home to their children."

Mayor Bloomberg joined Kelly at the hospital, and told reporters, "This is the 12th NYPD officer who has been shot this year and the second officer we’ve seen shot this week. Thankfully the news tonight did not end tragically, but as we saw on Tuesday with the murder of Nassau County Police Officer Arthur Lopez and last year with the murder of Police Officer Peter Figoski, these incidents sometimes really do end where the police officer does not go home to his family."

#bronx
#cop shot
#crime
#ivan marcano
#mugging
#nypd
#the bronx
#original
Do you know the scoop? Comment below or Send us a Tip