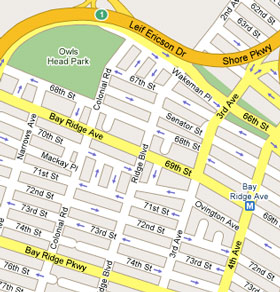 An off-duty police officer was raped in her Bay Ridge home last night. Police believe that the attacker entered her apartment through a window or door. The victim described him as being a white man wearing a mask; the attacker also threatened her with a knife.

The police flooded Bay Ridge Avenue and the surrounding streets with patrol cars, helicopters and canine units. Neighbors were worried, with one telling the Daily News, "This is a very scary thing. I have three daughters, so I'm very worried. We've lived here 20 years, and we've never had this kind of trouble. Nothing like this has ever happened."

The victim, who has been on the force for five years, was treated at Lutheran Medical and reporteldy did not have any injuries beyond the rape. The attack occurred in the 68th Precinct, which also includes Dyker Heights and Fort Hamilton. According to the latest CompStat numbers (PDF), there have been 5 rapes year-to-date and there were 9 rapes in 2006.