The off-duty police officer who allegedly drunkenly drove his SUV onto a Brooklyn sidewalk, killing one man and injuring three others,apparently moved from the drivers seat to the passenger side of his car. A witness explained that he tried to drive off, but when he realized he couldn't, "he switched sides, from the driver’s seat to the passenger side... Everyone saw him do it."

Another witness, Jaminah Kang, said to the Daily News, "The EMTs had to get a saw to remove the man impaled on the railing. Another man (looked) like he took a chain saw to the knee." 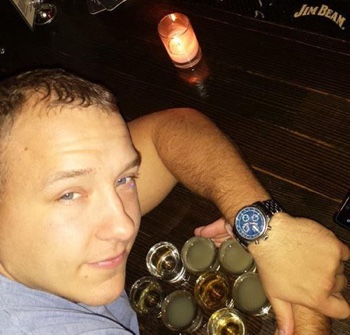 The awful incident unfolded at 3 a.m. on Saturday. Police say that 28-year-old Nicholas Batka, an NYPD police officer who was off-duty at the time, was driving west on North 8th Street and made a right turn onto Bedford Avenue in Williamsburg "where he mounted the sidewalk and struck the four pedestrians causing head and body trauma."

"I heard people screaming and saw people lying all over the place. Just covered in blood and really badly ­injured," Kelly Convery, who lives in a building on Bedford, told the Post. "Someone in front of my stoop had a bone sticking out of his leg. People were screaming."

Witnesses say that Batka, who was scheduled to be on-duty at 7 a.m., flashed his NYPD badge and apparently asked cops, "Did I kill anybody?" when they arrived.

Angie Zielenski described the chaos to WABC 7, "I see this girl lying on the floor, so I lift her head up because she was bleeding from her head and her leg. I ran across the street, and I called 911, and the driver jumped from the driver's side to the passenger side, and there was a man who was holding the door of the SUV shut to not let him out."

A group of witnesses and bystanders flocked to help the victims. They also prevented Batka from leaving his Dodge Durango:

"Don't let him get out, he's going to run away." Moments after off duty #NYPD cop allegedly hit 4 ppl while drunk. pic.twitter.com/SFxtXsYuyn

The Daily News reports that one victim is yelling, “Help! Help! Help!” I don’t want to lose my leg! Help!" in a cellphone video from the scene.

A 21-year-old male victim died at Bellevue Hospital, which is where Batka was taken for his injuries. According to the News, "Sophia Tabachoun, 20, was listed in stable condition, while Divya Menezes, 23, was hospitalized at Bellevue in critical condition. She underwent surgery late Saturday after breaking both legs in the crash, officials said. James Balchaunas, 24, was also hurt, but his condition was not immediately known."

The Post adds, "Three of them had attended MIT, the other NYU."

A prosecutor had argued for $1 million bail—"saying that Batka tried to get away, that he moved to the passenger seat and claimed he hadn’t been driving"—but his lawyer noted that Batka is trying to adopt his recently-deceased brother's daughter and is also reportedly caring for his mother.

His license was also suspended.

#brooklyn
#drunk driving
#nicholas batka
#off duty cop
#pedestrian fatality
#vision zero
#williamsburg
Do you know the scoop? Comment below or Send us a Tip