Authorities are investigating a Brooklyn road rage altercation that resulted in an off-duty police officer killing the other driver. The dead driver's relative told the Post, "They shot him in the head."

The NYPD says the violent encounter occurred around midnight today, when the off-duty police officer, in his 2002 Nissan Altima, was driving eastbound on Atlantic Avenue in East New York and got into "a traffic dispute with another motorist, who was operating a 2016 Kia EX."

Both cars stopped at a red light at Bradford Street, where the 37-year-old male operator of the Kia exited his car and approached the off duty officer, who was still seated in his vehicle, and began to punch him repeatedly in the head through the car window. The off duty officer discharged his firearm during the assault. The male operator sustained a gunshot wound. EMS responded and pronounced him deceased at the scene. 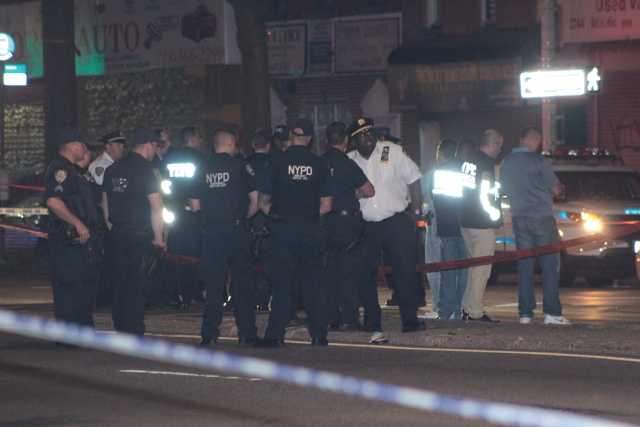 The victim has been identified as Delrawn Small. His friend, Lloyd Banks, told the Daily News that the police officer actually got out of the car: "Delron and the cop's car almost hit each other. And Delron got out of the car and the cop just jumped out and started screaming. He just shot him right there on the street. Delron was unarmed. His wife and kids were still in the car. They saw everything."

Dempsey's children include two teenage girls and a newborn boy.

And Dempsey's brother told WABC 7, "I'm pretty sure they're going to try to find whatever they can on my brother to make it seem like it's a different incident. But that's not the case, it's a road rage incident that went way too far."

The NYPD's Force Investigation Division is looking into the incident. Council Member Inez Barron predicted the NYPD brass's response: "We can expect (NYPD Commissioner William) Bratton's gonna talk about, 'Oh, we're gonna look at the re-training; we're gonna look at training programs.' It’s beyond that. A part of the problem why officers continue to act with impunity is because they have an unspoken immunity."

The cop, who was not in uniform and reportedly works at the 79th Precinct, was taken to a hospital for "contusions to the head," police say.