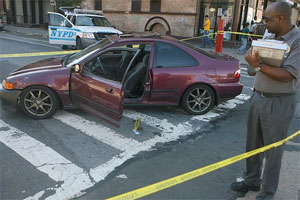 An off-duty police officer turned himself in for Sunday's fatal road rage-related shooting in Harlem. Sean Sawyer, who joined the NYPD and worked as an undercover officer, approached a police cruiser yesterday morning, "I think you guys are looking for me for the shooting last night on the FDR [Drive]...This is the gun I used...I thought the guy was armed - make a sign like a gun. I think I'm having a heart attack; please get an ambulance."

That someone was Jayson Tirado, a 25-year-old Lower East Side resident. An accident on the FDR Drive had caused much traffic and apparently Sawyer, in a SUV, was upset that Tirado, driving a Honda with two passengers, had refused to let him merge into a lane to exit the FDR. The two argued, and later Tirado cut Sawyer off on First Avenue (here's a map from the Daily News).

With Tirado's car blocking his, Sawyer apparently got out of his car and approached the Honda. A witness said that Tirado gestured as if he had a gun, looked in the backseat, and may have said, "You want to see Mr. Ruger?" That remark may have set off Sawyer, who then shot at Tirado's car with a 9mm mini-Glock around 117th Street and First Avenue. Sawyer then drove off.

Tirado and his passengers were unarmed. Tirado, who has a young daughter, died at Harlem Hospital. Newsday had quotes from the victim's and shooter's families:

"He killed him like a reckless teenager, shooting him through the window, abandoning my son, letting him die," said Tirado's mother, Irene Tirado, 54, of the Lower East Side. "Now, I find out he's a police officer."

But Sawyer's brother, Christopher, 36, called his brother "a hero by nature."

"He's a good cop," said Christopher, who lives in the same Manhattan Valley apartment building as his brother. "It's a clean shooting. You do not reach down into your car on a New York City police officer in this city.

"My brother did his job."

One of Tirado's passengers, Jason Batista, says that Sawyer never identified himself as a police officer during the exchange; the other passenger was too drunk to remember and police say Tirado was also drinking. It's unclear whether Sawyer was drinking, but Batista claims Sawyer also said, "You don't know how to drive. Don't make me kill one of you n-----s."

Sawyer was suspended without pay and stripped of his badge (he gave the police officers he turned himself into his gun), as well as given a Breathalyzer test though the shooting occurred almost a day earlier. The NY Times reports that "officials were trying to determine whether to charge Officer Sawyer with a crime and whether he had acted in self defense, according to the authorities." Additionally, Sawyer faces discipline for not reporting the shooting.