Of Hookers and Hockey Players 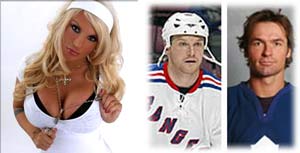 New York Ranger forward Sean Avery may be on thin ice with any woman he's currently seeing, as his name popped up in the spreadsheets of Murray Hill madame Kristin "Billie" Davis. The distaff pimp was arrested after being linked to former Gov. Eliot Spitzer--one-time state attorney general and longtime whore connoisseur. Avery denies that he knows Davis or ever used a prostitute, laughing off the incident as a practical joke by someone familiar with his high profile and playboy lifestyle. Avery has been attached to supermodel Rachel Hunter and actress Elisha Cuthbert. The hockey player is just one of many high-profile clients listed in Davis' computer records.

As clients of Davis' Maison de L'Amour are probably sitting at home and sweating out whether they'll be outed as johns, the second in command of the operation isn't gathering moss waiting for the cops to pick her up. Grace O'Toole was allegedly in charge of the details of the business, including booking appointments, scheduling, and managing payments. The News reports that she fled her apartment wearing large sunglasses and toting a travel bag and a pet carrier. She was last seen heading in the direction of her mom's house in NJ.