Of Course: Rangel's Landlord Tried to Evict Other Rent-Stabilized Tenants 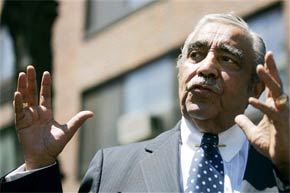 While Representative Charles Rangel has defended his multiple rent stabilized apartments--one of which he is giving up--as legal and aboveboard, today the NY Times details how his landlord has attempted to evict other longtime rent-stabilized tenants(ones without political juice), sometimes using aggressive tactics.

Lenox Terrace, located on West 132nd to West 135th Streets between Lenox and Fifth, is operated by the Olnick Organization. One tenant, who was going blind and could not write his rent check, was threatened after his daughter wrote checks out for him using their joint account. Management refused the checks, "because his daughter’s name was on the check but not on the lease for the apartment" and threatened to evict the man. After the tenant died, his family got a bill for the rent during the months his daughter sent checks, plus legal fees for eviction procedures incurred after the tenant's death.

Another tenant, who health problems forced him to leave outside the building, was nearly evicted, because Olnick claimed his wife and child who lived there weren't on the lease--though there are rent succession rights for immediate family members. Their case is pending in court. And one tenant was successful in quashing Olnick's demand he needed separate leases for his apartment and his parking space.

Governor David Paterson, who lives in a two-bedroom rent-stabilized apartment in the building, told the Times tenants asked him to intervene on their behalf and "feels he let down his fellow tenants because he could not block their evictions." And the Times details reason why Olnick could have tried to force Rangel out--but for some reason declined to.