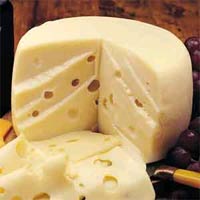 Add this to the list of instances when blocks of cheese can be considered suspicious: When they are found in your carry-on luggage by the Transportation Security Administration. NBC Nightly News found an advisory warning airport screeners to be on the lookout as terrorists may be conducting dry runs.

There have been four seizures since September that have aroused suspicion. At San Diego, Milwaukee, Houston and Baltimore airports, TSA screeners have been finding more "wires, switches, pipes or tubes, cell phone components and dense clay-like substances" - such as cheese - and asked screeners observe “ordinary items that look like improvised explosive device components.”

However, the TSA said, “There is no credible, specific threat here. Don’t panic. We do these things all the time.” You can read the TSA's advisory here (PDF)