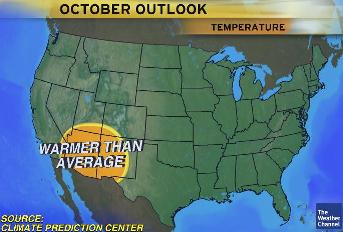 Here are some numbers for you today. The warmest October on record was in 1947, when it was 7.1 degrees above average. Through yesterday this October has been 7.3 degrees above normal. The next 5-6 days are expected to be average 10 degrees warmer than normal. So, although AccuWeather says some unseasonably cold air will arrive at the end of the month, it looks like this will become the warmest October ever recorded in Central Park.

A high pressure system off the coast and a low pressure system over the central part of the country are bringing us warm southerly breezes today. The high will be around 73 degrees. As the high pressure system recedes and the low approaches we should see an increase in both cloudiness and in the chance of rain. A light rain shower this afternoon is not very likely but also not out of the question.

Tomorrow is going to be a slightly warmer version of today. The best chance of rain this week is late on Friday. Showers may linger into Saturday, but Sunday is looking pleasant. Monday could be interesting, as it currently looks like we will be on the northern edge of some really warm air.

As we often do, Gothamist checked in on the NYC reservoir levels this morning. Slightly lower than normal but nothing to be worried about. A bit further upstate, the Erie Canal will be closing early this season because of low water levels. Lack of rain and warm water temperatures have also affected the annual salmon run. The upstate dryness is nothing compared to the drought currently occurring in the southeastern U.S. Areas of Virginia, the Carolinas, Georgia and Alabama are experiencing a record drought. In a worst-case scenario, Lake Lanier, the reservoir that supplies Atlanta with much of the city's drinking water, may run dry in 3-4 months. Yikes! At least northern Georgia is expecting substantial rain tonight.

October temperature outlook map from the first of the month, demonstrating that monthly weather outlooks are more art than science, from weather.com.