Occupy Williamsburg At Union Pool Tonight, Or Whatever, Either Way

Some people are getting together tonight to talk about doing some sort of Occupy Williamsburg thing tonight at Union Pool. It might be cool, but we're actually a lot more into Occupy Bushwick. And Laurel Halo is playing tonight at Glasslands, so we don't know. Maybe check out the Union Pool thing first, and if there aren't any hotties there, occupy the bathroom for a key bump and bike over to Glasslands? Here's their manifesto. It could be okay, we guess:

Many of us in Williamsburg have been involved in and inspired by the Occupy Wall Street movement. OWS is not about abstract politics. It's about unemployment, health care, dwindling social services, huge student debts, brutally expensive housing and bleak futures. In the... most fundamental and personal ways, and in the places where we live them, OWS is a worldwide movement to reclaim our lives.

What would it mean to Occupy Williamsburg? The goal of this first gathering of Occupy Williamsburg is to articulate and organize around this question. The Williamsburg/Greenpoint re-zoning laws passed by the City Council in 2005 paved the way for a rapid, and continually jaw-dropping wave of gentrification. Yet even as luxury condos grow like weeds on the waterfront, artists' spaces and small businesses get priced out and Starbucks' presence on Bedord Ave. looms, there remains a dense interweaving of strong communities with intricate histories and both conflicting and common concerns

Coming together in solidarity with the broader spirit of OWS will allow us to articulate, understand and act on issues specific to our daily lives in Williamsburg. Zuccotti Park is over, but the occupy movement has only just begun. It's moving home, to the places where we live, work and hang out.

We might silkscreen some Occupy Williamsburg T-shirts to sell at the thing tonight, if we still have time after spending the afternoon taking cliched potshots at the Williamsburg "hipsters." Like, is Occupy Wall Street still relevant? Will Kyp Malone play a surprise set at Union Pool in support of Occupy Williamsburg, or has he sold out? Is the Singing Subaru guy with the 99 Percent? Also, who hung this banner on that stalled nondo at South Fourth and Bedford? Because that's pretty alt: 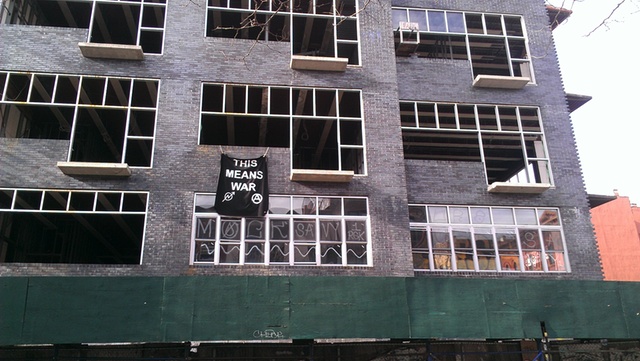 A banner appeared on this building on South Fourth Street and Bedford Avenue in Williamsburg this weekend. @NatashaLennard says it was part of an abandoned building banner drop. (Photo courtesy John Bedard)