Occupy Wall Street Here Until 2025, According To NY Post

Over the weekend, a New York Post reporter risked her life staying in Zuccotti Park and wrote that it is "quickly becoming one of the most dangerous places in New York City." Now, the tabloid has discovered shocking news that Occupy Wall Street has events planned through 2025! This leaderless, rag-tag group of smelly "vagabonds" have a tightly regimented schedule that they will surely follow 14 years from now! 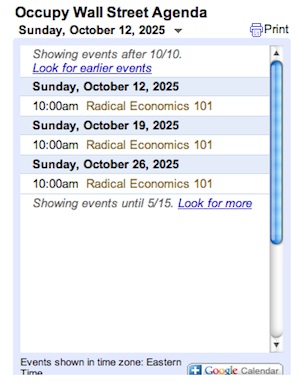 The Post points to an online calendar on one of the movement's websites that has "Radical Economics 101" scheduled at 10 a.m. on Sunday, October 26, 2025. When asked what this meant, protest spokesperson Patrick Bruner told us, "I have no idea. It's probably a placeholder, or someone messed up a time code in an event entry." Suuurreee. I suppose we'll just ignore the rumors that a few applications to York Avenue Preschool listed "Zuccotti Park" as a residence.

But as always, the tabloid gets people to bite its rancid bait. "Noooo! Not 2025," a 38-year-old food cart operator named Mohammed cries. "It was good business [before the protest], and now it's so slow. 2025, I don't think so. Never! I hope next month they'll be gone."

Pat Moore, the fair if exasperated CB 1 Quality of Life Committee member is more reasonable: "Maybe it's a typo? It will be Occupy Wall Street's grandchildren. The community board will have to fight to build a school down there." Bruner does stress, "We have no plans of leaving. Who knows if that means 2025, but we're not going anywhere."