As the Occupy Wall Street protests have grown larger and spread into other cities, attracting the attention of the media, politicians, and celebrities, not everyone has written impassioned blog posts on their behalf. Karl Rove has mocked protesters, the Tea Party has attacked them, NYPD spokesmen have given smug statements about them, certain Reuters journalists have written conspiratorial essays about the protests imaginary connection to billionaire George Soros, and even some people who are economically part of the 99% don't particularly like OWS.

A new website has popped up for people who identify as part of the "1%" to publicly "stand with the 99%"—but there are certain members of the 99% who don't approve of OWS, and make themselves heard using the same iconography. The picture turned up on Dom Giordano's Facebook page, and has sparked some heated debate around the web. 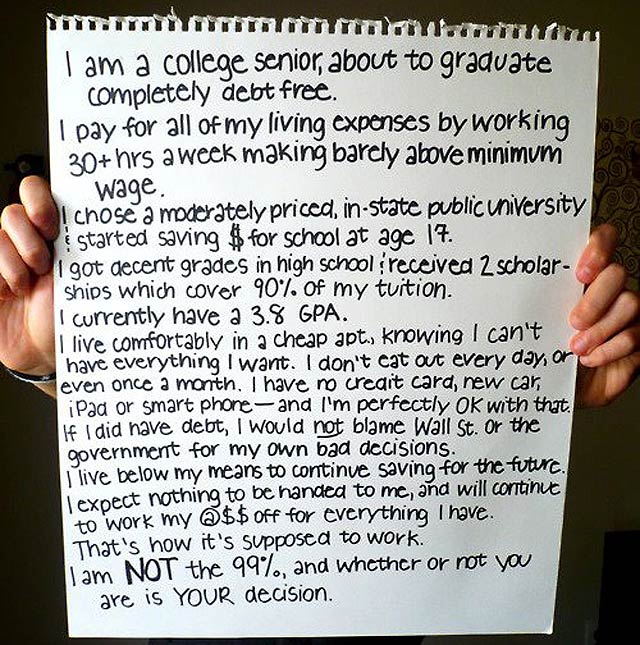 Karl Rove wrote a damning editorial in the WSJ about OWS, in which he labels them nothing more than, "a series of events populated by a weird cast of disaffected characters, ranging from anarchists and anti-Semites to socialists and LaRouchies." With many pundits asking whether OWS is the "Tea Party of the left," Rove also goes out of his way to differentiatie them from the grassroots mad-as-hell movement. The Tea Party seems to appreciate it, as they don't very much like being associated with OWS: according to Politico, the Tea Party is searching for anything they can to discredit OWS, “hunting for evidence of union ties, fringe rhetoric and bad behavior — ranging from news of arrests, to recordings of incendiary speeches, to tales of littering, drug use and debauchery.”

And while it's not surprising to hear that NYPD spokesman Paul Browne got in some jabs at the photo/video equipment of the protesters ("Officers are aware of the fact that they are being photographed," said Browne, adding, "They may not have been aware of the extent of personal disposable income among the demonstrators as reflected in the quantity and quality of their pricey equipment."), what is surprising is that Reuters published an anti-OWS post today that sought to connect the movement with billionaire George Soros...and failed miserably.

You can read the whole controversial article here, but to sum it up: Soros’ Open Society donated money to The Tides Center, who contributed to Adbusters, who are credited with the initial spark of OWS. It's pretty thing stuff, as everyone on the web has pointed out; Reuters writer Anthony De Rosa tweeted, "I'd sum up my personal feelings on the article as: that's not @Reuters journalism." After much mockery, Reuters's Felix Salmon also wrote a long article bashing the story for having "no real substance to it at all." But the controversy has sparked one question which no one has satisfactorily answered yet: is Kevin Bacon behind Occupy Wall Street?

Note: Reuters seems to have replaced the controversial story about the makebelieve Soros/OWS connection with a post with the headline, "Soros: not a funder of Wall Street protests." You can read all about the "upgraded" story here.

#conspiracy
#george soros
#haters
#occupy wall street
#ows
#protest
#Zuccotti Park
Do you know the scoop? Comment below or Send us a Tip