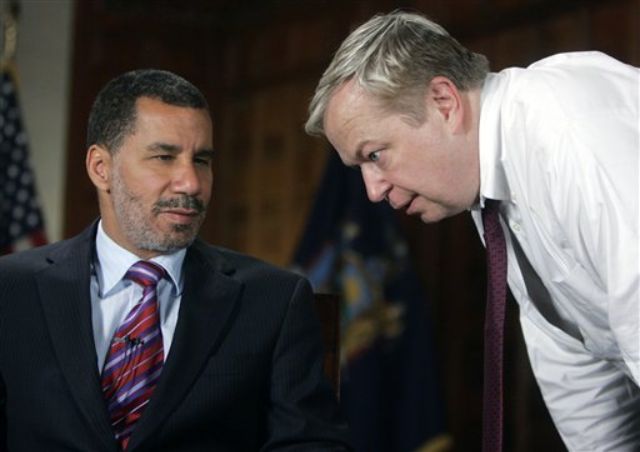 Photograph of Governor Paterson and O'Bryne by Mike Groll/AP

After a week of defending his years of missed tax payments as the amount he owed only grew from what originally revealed, Governor Paterson's top adviser Charles O'Byrne resigned yesterday. The governor accepted the letter of resignation from his closest aide "with regret" after publicly defending O'Byrne who had been lambasted by the NY Post and others in the press for claiming his depression and "non-filer syndrome" had led to years of tax delinquency that totaled over $300,000.

Those close to the governor expect this to be a trying time for Paterson, who is about to go into negotiations with State Legislature in an attempt to scale back the budget $2 billion in order to confront the state's financial crisis. O'Byrne was seen as more than just an adviser. The Times says that they had "an unusually close relationship" calling him Paterson's "gatekeeper," "quarterback", "his priest" and "the glue that held the administration together." However, the Post reports a source as saying O'Byrne "had to go. Charles had become damaged goods with the first story, it was compounded during the week."

The resignation is only the latest remarkable detail in O'Byrne's already illustrious story. After serving on the altar for both JFK Jr.'s wedding and funeral and being put through law school by his close confidants the Kennedys, he left the Jesuits and came out as an open homosexual. His rise in politics was equally as dramatic. Four years ago, his only title was that of volunteer for the Howard Dean campaign.

In his resignation letter to Paterson, he said, “Members of an elected official’s staff should never distract from the work of the principal who they are privileged to serve. It is clear to me that my personal history has become a distraction to the work of your administration." O'Byrne's responsibilities will be divided up and assumed by William Cunningham III and Charlotte Hitchcock.

#charles o'byrne
#governor paterson
#tax evasion
Do you know the scoop? Comment below or Send us a Tip