Obama's Lead in NY Falls to 5 Points Over McCain 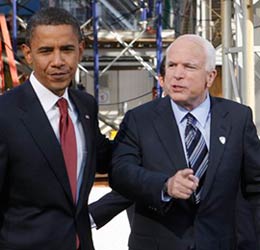 NY State is considered to be a blue state, but a new poll from Siena College Research Institute finds that Barack Obama's lead over John McCain has fallen to just five points. Previously, Obama's lead was 18 points in June and 13 points in July.

Respondents believe that Obama is the best candidate on issues economy, Iraq, health care and education, while they seem to prefer McCain on terrorism and "Enhancing America's strength in the world." But for personal attributes, McCain gets the nod on patriotism, experience, integrity and leadership, while Obama is considered more compassionate and intelligent. And while they find McCain (79%) more qualified than Obama (67%), Sarah Palin is considered even less qualified than Obama with 47% (Joe Biden got 70%).

Siena New York Poll spokesman Steve Greenberg said, “The conventions are over. The running mates are set. And as voters begin to focus on the race, New York’s overwhelming Democratic enrollment advantage is not reflected in how voters tell Siena they plan to vote.” And in Long Island, the Dowling Institute found Obama just leads by 5 points on Long Island as well. Dowling's Michael Dawidziak believes that the selection of Palin after the DNC "squelched" Obama's bounce and that McCain got a bigger bounce and benefited from the RNC being near Labor Day (more people watching).