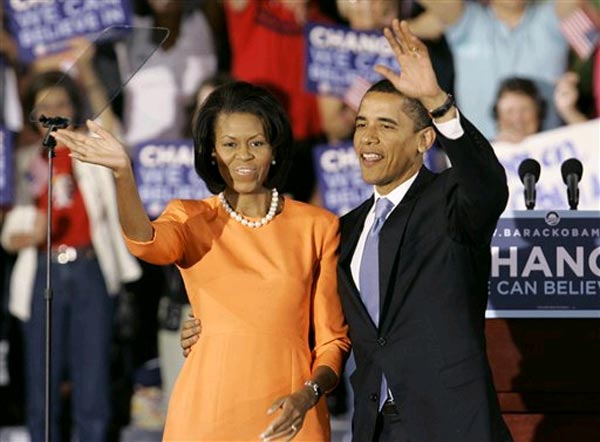 Photograph, top, of Michelle and Barack Obama in North Carolina by Gerry Broome/AP; photograph, below, of Clinton supporters in Indianapolis by Elisa Amendola/AP 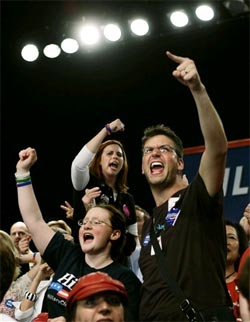 Clinton was hoping for a significant win in Indiana, for momentum and to claim Obama can't draw enough working class white voters. NBC's Andrea Mitchell says the mood at the Clinton camp rally in Indianapolis is "schizophrenic"--earlier in the night, apparently campaign staffers were thinking Clinton could win by 8 points.

The Caucus says Obama's N.C. victory speech was one of his "better speeches": "He was gracious toward Mrs. Clinton, promising to unite the party and the country, in a more or less open bid for her supporters and to pave the way for her eventual withdrawal."

Update, 11 p.m.: CBS News has called Indiana for Clinton, but NBC, CNN, and ABC all say it's too close too call. Clinton's speech was quasi victorious, but it was definitely muted (Chris Matthews called it charming).

Update, 11:50 p.m.: MSNBC says with half of Gary, Indiana reporting, there's less than 20,000 votes separating Clinton and Obama, and the NY Times' numbers support that: Clinton leads with 584,113 votes but Obama has 564,323 (that's 91% of the precincts reporting). The Times also says "options dwindling for Clinton."

And with 98% of N.C. precincts in, Obama has won North Carolina by 14 points. The headline so far: This has been Obama's worst month and he still managed a strong showing in Indiana/ Clinton wasn't able to continue the momentum from Pennsylvania.

We'll have more in the morning--check out CNN.com, MSNBC.com, NYTimes.com, Politico.com, etc. in the meantime.

#barack obama
#election 2008
#hillary clinton
#indiana
#North Carolina
#primary
Do you know the scoop? Comment below or Send us a Tip