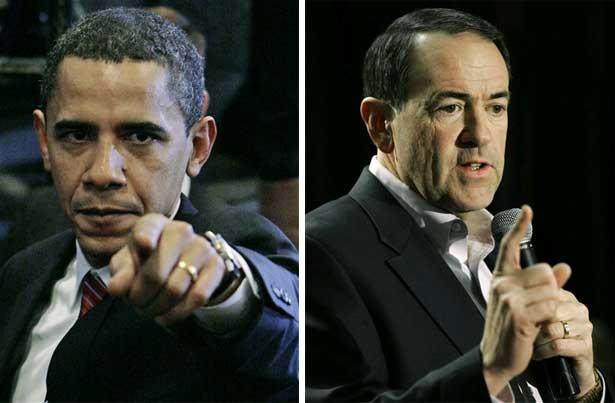 That just happened! Senator Barack Obama won the Democratic Iowa Caucus with at least 37% of the vote (projections are changing). Former Senator John Edwards got 30% of the vote while Senator Hillary Clinton got 29%. The media is playing this as a huge failure for the Senator from New York, given how powerful the Clinton machine has seemed. Also stunning: There were 82% more Democratic voters in this year's caucus compared with 2004, which pundits suggest means Iowa, which President Bush won in 2004, is certainly in play for the Democrats.

Former Arkansas governor Mike Huckbee handily won the Republican caucus, with 34% of the vote. Former Massachusetts governor Mitt Romney, who outspent Huckabee by tens of millions, conceded with 25%; Senator John McCain and former Senator (and Law & Order DA) Fred Thompson tied for third place with 13%. (Former mayor Rudy Giuliani, who didn't focus much attention in Iowa, got 4% - after Ron Paul's 10%!) During his victory speech, Huckabee said he wasn't sure if he could love a state as much as he loved his home state of Arkansas, but tonight, "I love Iowa a whole lot." Politics aside, his public speaking is great and he's very engaging. It also seems that voters responded to Huckabee's attacks on Romney's relatively excessive spending and were repelled by Romney's negative ads. 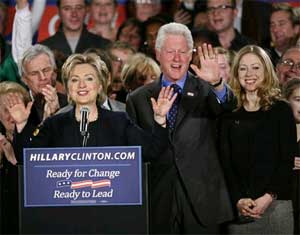 During her concession speech, Clinton thanked the crowd and acknowledged it was a great night for Democrats, given the turnout, and emphasized that it showed the desire for a Democratic president. She then said she's ready for New Hampshire. And seen on the dais, besides former Secretary of State Madeline Albright and former President Bill Clinton: NY Lieutenant Governor David Patterson.

According to NBC polls, 57% of the voters were women - and Obama got most of the female vote (35% to Clinton's 30%). Tom Brokaw said that when he spoke to female voters in Iowa, many said they weren't sure Hillary could win and they wanted (a Democrat) to win. He added that it's unclear if she'll be able to be a Comeback Kid like her husband, who lost Iowa but went onto get second at New Hampshire and the presidency in 1992. Another interesting note: 60% of voters under 25 voted for Obama; 45% of voters over 65 voted Clinton. And of the Democratic voters who said they wanted changed, 50% voted for Obama.

During Obama's victory speech, he told his audience, "You have done what the cynics said we couldn't do. You have done what the state of New Hampshire can do in five days. You have done what America can do in this new year, 2008. In lines that stretched around schools and churches... Republicans and Democrats...you have said we are one nation, we are one people, and our time for change has come." He also promised to end the war in Iraq and bring home the troops and said, "9/11 is not a way to scare up votes, but a challenge that should unite America and the world against the common threats of the 21st century."

What these results mean so far in terms of the election: For the Republicans, Huckabee gets at least 22 delegates (who will then nominate a candidate at the Republican Convention), with 15 to be allocated. On the Democratic side, Obama gets 13 delegates, Clinton and Edwards get 10 each, and 10 still need to be allocated. Here's an FAQ on the Iowa caucuses.