Obama: We Should Probably Do <em>Something</em> About Global Warming At Some Point

Amid the destruction of the constitution, the erosion of our voting rights, and the rise of pastry as currency, it's sometimes difficult to remember that our species is due to expire in a tidal wave of boiling water and famine. Today President Obama announced that he was going to try and do something about it, just as soon as the heat trapped by man-made gases relented enough so he could see through his sweat.

Congress killed the president's cap-and-trade proposal for carbon emissions in 2010 because it made too much sense. And while America's greenhouse emissions have inched downward, this chart shows you just How Fucked We Truly Are. 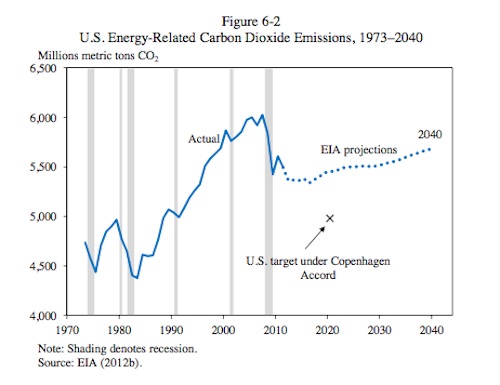 Aside from billions in loans toward renewable technology and a promise that the federal government will rely on renewable energy for 20% of its operations within the next seven years, the big announcement is that the EPA will regulate the carbon emissions of existing power plants for the very first time (that's right: no one was doing this before!). The regulations will be drafted in 2014 so they can go into effect by 2015, because the government operates like villains in action movies and give pleeeeennnnttyyyy of time for someone to stop them.

The president also said that his decision whether to approve a giant pipe carrying fossil fuels across the country will depend on how much of a climate impact the pipeline will have.

The net effects of climate impact will be absolutely critical to determining whether this project will go forward. It is relevant...I refuse to condemn your generation and future generations to a planet that’s beyond fixing.

But Condemnicans are happy to condemn us all, because of Jobs.

Both Republicans and some business leaders say they are concerned the proposals will jeopardize access to cheap fossil fuel energy that has helped keep America competitive with manufacturers overseas.

Exactly—until the day in which everything and every person is "overseas," we must remain competitive. Condemnican House Speaker John Boehner, who called Obama's plans "insane," added,

“Why would you want to increase the cost of energy and kill more American jobs at a time when the American people are still asking the question, where are the jobs?”

Take pride in knowing President Obama is doing something about global warming, until Congress uses an arcane procedure to override the EPA's regulations.

You can read the president's lengthy global warming plan here.