Obama to Name Clinton as Secretary of State Tomorrow 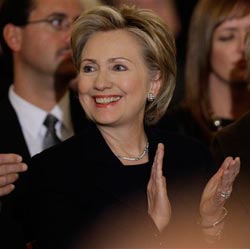 Finally: Senator Hillary Clinton will be announced as President-elect Obama's choice for Secretary of State tomorrow. And with that comes news that former president Bill Clinton has agreed to publicly name his donors. The NY Times reports that the disclosure of "more than 200,000 donors to his foundation" and library is "part of an accord" with the Obama team "that clears the way" for his wife's nomination. The announcement will be made at 10:40 a.m. EST in Chicago.

Not only that, the Times says this gesture is "among nine conditions that Mr. Clinton signed off on during discussions with representatives of Mr. Obama; all go beyond the requirements of law." Others include incorporating the Clinton Global Initiative separately so he's less directly involved and the former president submitting "his future personal speeches and business activities for review by State Department ethics officials and, if necessary, by the White House counsel’s office." The full text of the agreement is after the jump, via Politico.

Senator Richard Lugar (R-Indiana), who sits on the Senate Foreign Relations Committee, told ABC News' George Stephanopoulos that he expected to confirm Senator Clinton for the Secretary of State spot "knowing what we have here on this program today." He also commented on Bill Clinton's efforts to help his wife, "I think it's a big step, [but] I think the wide-ranging activities of President Clinton are very substantial on this earth, they will continue to be."

From Politico, the agreement between the Obama and Clinton camps, regarding Bill Clinton's past work and Hillary Clinton's Secretary of State nomination and possible confirmation:

"At the request of President-elect Obama, and to avoid even the appearance of a conflict of interest between the work of President Clinton and the service of Hillary Clinton should she be nominated and confirmed as Secretary of State, President Clinton is taking the following steps above and beyond the requirements of current laws and regulations.

— The Clinton Foundation will publish the names of everyone who has contributed since its founding in 1997 (this year).

— Should Senator Clinton be nominated and confirmed as Secretary of State, during her time of service, the Foundation will also publish the names of everyone who contributes going forward on an annual basis.

— The Foundation will separately incorporate CGI [the Clinton Global Initiative] from the Foundation; President Clinton will continue to host CGI gatherings, such as the one in NYC and its meetings for college and university students, as Founding Chairman of CGI.

— Although President Clinton will continue to invite participants to CGI events (which involves normal registration fees), he will not solicit 'sponsorship' contributions for CGI.

— CGI will also not host annual events outside the US and CGI will not solicit or accept foreign government contributions.

— Given the extensive and life-saving work of the Clinton Foundation's HIV/AIDS Initiative which can and should continue, the Foundation will continue to fulfill its commitments funded by foreign governments (including, among others, Sweden Norway, France, Great Britain). In the event an existing contributing country chooses to substantially increase its commitment, or a new country, or government-owned entity, decides to contribute, the Foundation will share such proposed contributions with the State Department ethics officials. State may also share the issue to the WH Counsel's office for review. To whatever extent there are conflict of interest concerns raised about such potential contributions related to Senator Clinton's service as Secretary, they will be conveyed to Hillary Clinton and the Clinton Foundation for appropriate action.

— During her tenure as Secretary of State, should she be nominated and confirmed, President Clinton will share any proposed consultant relationships with State Department ethics officials, and the same procedures outlined above will apply here as well.

“None of these protocols is required by any law, and all of them go above and beyond the requirements of the law to avoid even the appearance of a conflict of interest. The procedures are, of course, in addition, to the already extensive laws and regulations government the activities of spouses of federal officials (such as those outlined in 5 USC 208 and related regulations).”

#bill clinton
#hillary clinton
#president obama
#president-elect obama
#secretary of state
Do you know the scoop? Comment below or Send us a Tip