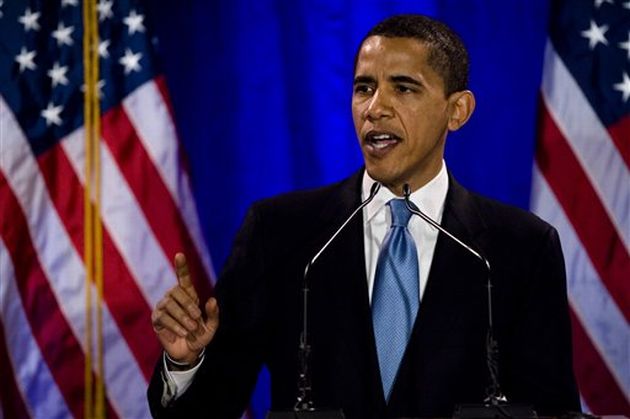 Photograph of Obama in Philadelphia by Matt Rourke/AP

This morning, Senator Barack Obama delivered a 45-minute speech at Philadelphia's National Constitution Center, attempting to put behind him the controversial remarks made by his mentor, pastor Jeremiah A. Wright. Though Obama quickly denounced the remarks last week, the story didn't go away. Today, he reiterated his condemnation of Wright’s more inflammatory beliefs about racism in America, but would not denounce him entirely, giving way to a broader discussion about race:

I suppose the politically safe thing would be to move on from this episode and just hope that it fades into the woodwork. We can dismiss Reverend Wright as a crank or a demagogue, just as some have dismissed Geraldine Ferraro, in the aftermath of her recent statements, as harboring some deep-seated racial bias… I can no more disown him than I can disown the black community. I can no more disown him than I can disown my white grandmother – a woman who helped raise me, a woman who sacrificed again and again for me, a woman who loves me as much as she loves anything in this world, but a woman who once confessed her fear of black men who passed by her on the street, and who on more than one occasion has uttered racial or ethnic stereotypes that made me cringe...

As imperfect as he may be, he has been like family to me. He strengthened my faith, officiated my wedding and baptized my children. Not once in my conversations with him have I heard him talk about any ethnic group in derogatory terms, or treat whites with whom he interacted with anything but courtesy and respect.

Obama did remark the country is in a "racial stalemate" and said, "I have never been so naïve as to believe that we can get beyond our racial divisions in a single election cycle, or with a single candidacy – particularly a candidacy as imperfect as my own."

Obama will be in New York City

on March 27th on a one-day fund raising mission. He’s expected to raise over a million dollars, with a luncheon at the Credit Suisse building, two $2,300/guest receptions at separate Park Avenue apartments, and a $2,300/guest dessert reception hosted by author and gay rights activist Kevin Jennings at his Flatiron apartment.

#fundraising
#obama
#Reverent Wright
#Samantha Power
Do you know the scoop? Comment below or Send us a Tip
A new Gothamist is coming! We’ve moved comments over to our beta site. Click here to join the conversation and get a preview of our new website.