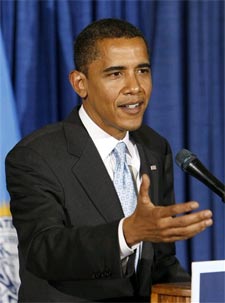 As most of yesterday's political news attention was on the fate of Florida's and Michigan's delegates, presidential hopeful Barack Obama announced his family "withdrew their membership at Chicago's Trinity United Church of Christ."

The church, which he has described as where he found his spirituality, had become a favorite target of opponents, after it was reported his former pastor and mentor Jeremiah Wright made remarks implying America got what it deserved on September 11 and the recent remarks from another pastor, Michael Phleger, which mocked Hillary Clinton, "I’m Bill’s wife, I’m white and this is mine" (video). Obama ultimately cut ties with Wright and strongly criticized Phleger's words as being "divisive, backward-looking rhetoric."

Obama, who did not denounce the church, said yesterday, "I make this decision with sadness. This is where I found Jesus Christ, where we were married, where our children were baptized. We are proud of the extraordinary works of that church.” He added that his family will be looking for a new church.

#barack obama
#election 2008
#Politics
#religion
#trinity church
Do you know the scoop? Comment below or Send us a Tip
A new Gothamist is coming! We’ve moved comments over to our beta site. Click here to join the conversation and get a preview of our new website.