Obama-Loving Christie Was Romney's First Choice For VP, According To Politico

As the 2012 election (finally) draws near, Politico says what was widely-suspected was true: Mitt Romney, the Republican candidate, wanted NJ Governor Chris Christie as his running mate. An insider says, "Mitt liked him because he saw him as a street fighter. It’s the kind of political mentality that Romney doesn’t have, but admires. He wanted someone who could play the Chicago game [like Obama headquarters] on its own terms."

Apparently Romney had decided that he'd ultimately go with Rep. Paul Ryan two weeks before the formal announcement, and that pissed Christie's camp: "Some Christie supporters were irritated to discover that the House budget chairman had been picked so long before the New Jersey governor had been told, meaning that he and other also-rans had remained as decoys. These supporters said at the time that Christie deserved more of a heads-up after being led on so strongly." Which is probably why this Post story was leaked: "Gov. Chris Christie wasn’t willing to give up the New Jersey statehouse to be Mitt Romney’s running mate because he doubted they’d win, The Post has learned."

Politico reports, "People involved in the selection process said the campaign believed there was no one who would be more adept and persuasive at delivering Romney’s message. Advisers thought Christie would excel at retail campaigning among working-class voters." The Romney campaign insider said, "He’d be great anywhere there are ordinary white men. They would have loved him because here’s this straight-talking, hard-charging, in-your-face guy, and he’s a man’s man. Ohio is the only battleground state where Mitt has a net negative gender gap — where his approval among men doesn’t outweigh the president’s approval among women. Chris Christie changes that." 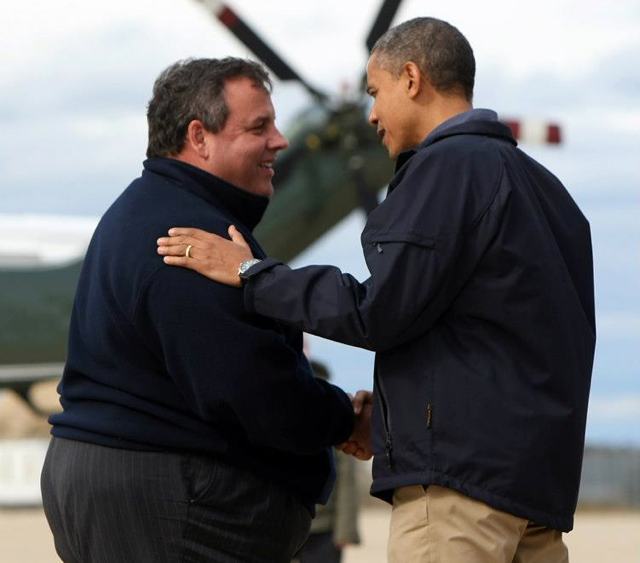 Christie was very popular while campaigning for Romney, but apparently the corporate raider tired of Christie's chronic lateness, "Chris is a sort of cavalier New York, New Jersey guy: ‘If I’m a few minutes behind, I’ll blame it on traffic. That’s just who he is," said one person. Then Romney's people felt Christie was too self-serving and became concerned about Christie's straight-talking and "raw emotion" being a "liability in the West Wing." Robots hate emotions!

Now, of course, everything is changed: Christie and President Obama are BFFS as they have bonded over the devastation NJ has faced after Hurricane Sandy. Christie has been repeatedly saying on national television, "The President has been outstanding in this and so have the folks at FEMA." Yeah, FEMA, that organization that Romney hates.